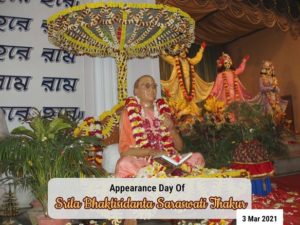 I offer my respectful obeisances unto His Divine Grace Bhaktisiddhānta Sarasvatī, who is very dear to Lord Kṛṣṇa, having taken shelter at His lotus feet. I offer my respectful obeisances to Srī Vārṣabhānavī-devī-dayita dāsa [another name of Srīla Bhaktisiddhānta Sarasvatī], who is favored by Srīmatī Rādhārāṇī and who is the ocean of transcendental mercy and the deliverer of the science of Kṛṣṇa. I offer my respectful obeisances unto you, the personified energy of Srī Caitanya’s mercy, who deliver devotional service which is enriched with conjugal love of Rādhā and Kṛṣṇa, coming exactly in the line of revelation of Srīla Rūpa Gosvāmī. I offer my respectful obeisances unto you, who are the personified teachings of Lord Caitanya. You are the deliverer of the fallen souls. You do not tolerate any statement which is against the teachings of devotional service enunciated by Srīla Rūpa Gosvāmī.
Today, 3rd March 2021, ISKCON Mayapur celebrates the auspicious appearance day of His Divine Grace (HDG) A.C. Bhaktisiddhanta Saraswati Thakura, the spiritual master of HDG A. C. Bhaktivedanta Swami Prabhupada. He was the son of Bhaktivinoda Thakur, a great acarya in the line of Gaudiya Vaisnavism. His prominent contributions are in form of His writings, 64 Gaudiya Mathas and giving the world a disciple (Srila Prabhupada) who preached the message of Lord Caitanya all over the world.

Srila Bhaktisiddhanta Sarasvati Thakura Prabhupada was born in 1873 at Jagannatha Puri. His father, Kedaranatha Dutta (Bhaktivinoda Thakura), was a magistrate of the city and superintendent of Jagannatha temple. In his later years Bhaktivinoda founded and conducted nama-hatta – a travelling preaching program that spread theology and practice of Caitanya throughout rural and urban Bengal, by means of discourses, printed materials, and Bengali songs of his own composition. He also opposed what he saw as apasampradayas, or numerous distortions of the original Caitanya teachings. He is credited with the rediscovery of the lost site of Caitanya’s birth, in Mayapur near Nabadwip, which he commemorated with a prominent temple.

Srila Bhaktisiddhanta Sarasvati Thakura was educated in Calcutta and became learned in Mathematics and Astronomy. In his childhood he once took a mango which was meant as an offering for the Deity. When his father rebuked him, saying that he should not have taken the fruit which was meant for the Lord, the child took it very seriously and thought himself a great offender, promising not to take mango again throughout his whole life. He was known as Bimal Prasad Dutta before his renunciation. On account of his writing a book on astronomy known as Surya Siddhanta, he received the title Siddhanta Sarasvati. And, when he took sannyasa, preaching the gospel of Lord Chaitanya, he was known as Srila Bhaktisiddhanta Sarasvati Thakura. He was acclaimed a great scholar in Calcutta, and the celebrated Dr. Kalidas Nag used to call him ‘a living encyclopaedia’.

Reminisce:- Srila Bhaktisidanta Saraswati Thakur
1. We are put to test and trial in this world. Only those who attend the kirtana of the devotees can succeed.
2. Every spot-on earth where discourses on God are held is a place of pilgrimage.
3. Possession of objects not related to Krsna is our main malady.
4. Let me not desire anything but the highest good for my worst enemies.
5. As dalliance with the body in luxury increases, so wanes the spirit of service of the Lord.
6. Those favored by God find their paths set by thorns.
7. There is no peace or happiness in our worldly life. Circumstances create turmoil and annoyance.
8. Chant the mahamantra loudly and with attachment. This will drive away inertia, worldly evils and pests.
9. Be indifferent to bazaar gossip, stick firmly to your cherished goals, no lack or impediments of the world will ever stand in your way.
10. Pay due respects to the extroverts of the world, but do not be appreciative of their manners and conduct. They are to be shaken off from your mind.
11. A devotee feels the presence of God everywhere, but one averse to the Lord denies His existence anywhere.
12. You cannot appreciate transcendental matters with the reasoning of the world. It is sheer nonsense to decry them with the measuring stick of your intellect.
13. To recite the name of Sri Krsna is bhakti.
14. Life is for the glorification of topics on Hari. If that is stopped, then what need is there to carry on life.
15. Physical illness with Hari-bhajana is preferred to physical fitness without Hari-bhajana.
16. Our span of life on earth is short. Our life will be crowned with success if the body wears out with constant discourses on Hari.
17. We are here on earth not to work as artisans for making big buildings with wood and stone but to work only as messengers for the teachings of Sri Caitanya Deva.
18. A sycophant is neither a guru or a preacher.
19. To transform the adverse desires of the jivas is the supreme duty of the most merciful. To rescue one person from the stronghold of Mahamaya is an act of superb benevolence, far superior to opening innumerable hospitals.
20. Unless we are devoted to God, secularism shall not leave us.
21. Look within. Amend yourself, rather than pry into the frailities of others.
22. In this world of Maya, averse to the Lord, full of trials and tribulations, only patience, humility and respect for others are our friends for Hari-bhajana.
23. The Lord, Gaurasundara, puts His devotees in various difficulties and associations to test their patience and strength of mind. Success depends on their good fortune.
24. When faults in others misguide and delude you – have patience, introspect, find faults in yourself. Know that others cannot harm you unless you harm yourself.
25. I wish that every selfless, tender-hearted person of Gaudiya Math will be prepared to shed two hundred gallons of blood for the nourishment of the spiritual corpus of every individual of this world.