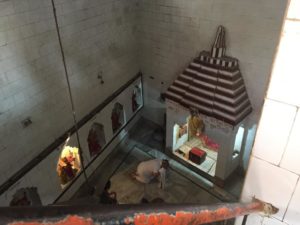 Below the temple of Caurasi-khamba, near Samudrika-kupa, is Sanatana Gosvami’s bhajana-kuti situated inside a cave.
Sanatana Gosvami would come to Gokula occasionally.
He would perform bhajana at this place, and daily take darsana of Sri Madana-Gopala.

Once, Sanatana Gosvami was amazed by an extraordinary child he saw playing in the soft sand on the bank of the Yamuna.

Sanatana Gosvami brought Him to his bhajana-kuti, and later had a magnificent temple constructed for Him, where he arranged for His service and worship.

More information, audio and pictures in our Archive.