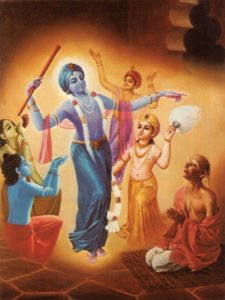 Shivananda Sena took care of the paying the customs duties and ferry fees for the group. He took personal care of everyone in the pilgrimage. He care of all the Devotees’ necessities, especially making lodging arrangements. He knew the roads through Orissa and would show the way. (Chaitanya Charitamrita 2.16.19-20)

In the third year, when Mahaprabhu’s associates took their wives with them, Shivananda Sena also took his wife and son, Shri Chaitanya Das. The Chaitanya Charitamrita’s description of that trip is as follows:

One of Mahaprabhu’s dear Devotees was Vasudeva Datta from Chittagong. He was very generous and somewhat prodigal in his spending. Mahaprabhu told Shivananda Sena to take charge of his affairs to help him cut back on his expenses, giving practical instructions on the necessity of earning money to run a household.

He respectfully said to Shivananda Sena, “Please take Vasudeva Datta to hand. He is too generous. He spends whatever he earns on the very same day. He is a householder, he has to save some money; if he doesn’t do so, he will not be able to maintain his wife and family. I want you to supervise his income and expenditures; be his manager and resolve his difficulties.” (Chaitanya Charitamrita 2.15.93-96)

This is a section of the Live Book “Sivananda Sena”.