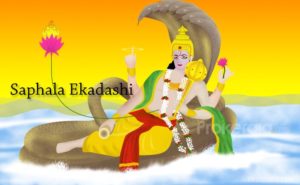 Yudhisthira Maharaj said, “O my Dear Lord Sri Krishna, what is the name of that Ekadasi that occurs during the dark fortnight of the month of Pausha (December-January)? How is it observed, and which Deity is to be worshipped on that sacred day? Please narrate these details to me fully, so that I may understand Oh Janardana.”

The Supreme Personality of Godhead Sri Krishna then replied, “O best of kings, because you desire to hear, I shall fully describe to you the glories of the Pausha-krshna Ekadasi.
“I do not become as pleased by sacrifice or charity as I do by My devotees observance of a full fast on Ekadasi. To the best of one’s ability, therefore, one should fast on Ekadasi, the day of Lord Hari.
“O Yudhisthira, I urge you to hear with undivided intelligence the glories of Pausha-krshna Ekadasi, which falls on a Dwadasi. As I explained previously, one should not differentiate among the many Ekadasis. O king, to benefit humanity at large I shall now describe to you the process of observing Pausha-krshna Ekadasi.
“Pausha-krshna Ekadasi is also known as Saphalaa Ekadasi. On this sacred day one should worship Lord Narayana, for He is its ruling Deity. One should do so by follow the previously described method of fasting. Just as among snakes Shesha-naga is the best, and among birds Garuda is the best, among sacrifices the Ashvamedha-yajna is the best, among rivers Mother Ganges is the best, among gods Lord Vishnu is best, and among two-legged beings the brahmins are the best, so among all fasting days Ekadasi is by far the best. O foremost of kings who took your birth in the Bharata dynasty, whoever strictly observes Ekadasi becomes very dear to Me and indeed worshippable by Me in every way. Now please listen as I describe the process for observing Saphalaa Ekadasi.

“On Saphalaa Ekadasi My devotee should worship Me by offering Me fresh fruits according to time, place and circumstance, and by meditating on Me as the all-auspicious Supreme Personality. He should offer Me jaambira fruit, pomegranate, betal nuts and leaves, coconut, guava, varieties of nuts, cloves, mangoes, and different kinds of aromatic spices. He should also offer Me incense and bright ghee lamps, for such an offering of lamps on Saphalaa Ekadasi is especially glorious. The devotee should try to stay awake all the Ekadasi night.
“Now please hear with undivided attention as I tell you how much merit one gets if he fasts and remains awake throughout the entire night singing and chanting the glories of Narayana. O best of kings, there is no sacrifice or pilgrimage that yields merit that is equal to or better than the merit one gains by fasting on this Saphalaa Ekadasi. Such fasting – particularly if one can remain awake and alert the entire night long – bestows the same merit upon the faithful devotee as the performance of austerity for five thousand earthly years. O lion among kings, please hear from Me the glorious history that made this Divine Ekadasi famous.
“Once there was a City called Champaavati, which was ruled by the saintly King Maahishmata. He had four sons, the eldest of whom, Lumpaka, always engaged in all manner of very sinful activities – illicit sexual encounters with the wives of others, gambling, and continual association with known prostitutes. His evil deeds gradually reduced the wealth of his father, King Maahishmata. Lumpaka also became very critical of the numerous devas, the empowered universal attendants of the Lord, as well as toward the brahmins, and every day he would go out of his way to blaspheme the Vaishnavas. At last King Maahishmata, seeing the unrepentant brazen fallen condition of his son, exiled him to the forest. Out of fear of the king, even compassionate relatives didn’t come to Lumpaka’s defense, so angry was the king toward his son, and so sinful was this Lumpaka.
“Bewildered in his exile, the fallen and rejected Lumpaka thought to himself, ‘My father has sent me away, and even my kinsmen do not raise but a finger in objection. What am I to do now?’ He schemed sinfully and thought, ‘I shall sneak back to the city under cover of darkness and plunder its wealth. During the day I shall stay in the forest, and as night returns, so shall I to the city.’ So thinking, the sinful Lumpaka entered the darkness of the forest. He killed many animals by day, and by night he stole all manner of valuable items from the city. The city-dwelling folk apprehended him several times, but out of fear of the king they left him alone. They thought to themselves that it must have been the accumulated sins of Lumpaka’s previous births that had forced him to act in such a way that he lost his royal facilities and became to act so sinfully like a common selfish thief.
“Though a meat-eater, Lumpaka would also eat fruits every day. He resided under an old banyan tree that unknown to him happened to be very dear to Lord Vaasudeva. Indeed, many worshipped as the demi-god (representative departmental head) of all the trees in the forest. In due course of time, while Lumpaka was doing so many sinful and condemnable activities, the Saphalaa Ekadasi arrived. On the eve of the Ekadasi (Dasami) Lumpaka had to pass the entire night without sleep because of severe cold that he felt due to his scanty bedclothes (bedding). The cold not only robbed him of all peace but almost of his very life. By the time the sun rose, near dead, his teeth chattering and near comatose. In fact all that Ekadasi morning, he remained in that stupour and could not awaken out of his near comatose condition.
“When midday of the Saphalaa Ekadasi arrived, the sinful Lumpaka finally came to and managed to rise up from his place under that banyan tree. But with every step he took, he stumbled and fell to the ground. Like a lame man, he walked slowly and hesitantly, suffering greatly from hunger and thirst in the midst of the jungle. So weak was Lumpaka that he couldn’t even concentrate to nor muster strength to go and kill even a single animal that whole day. Instead, he was reduced to collecting whatever fruits had fallen to the ground of their own accord. By the time he returned to his banyan tree home, the sun had set.
“Placing the fruits on the ground next to him (at the base of the sacred banyan tree), Lumpaka began to cry out, ‘O, woe is me ! What should I do ? Dear father, what is to become of me? O Sri Hari, please be merciful to me and accept these fruits as an offering !’ Again he was forced to lie awake the whole night without sleep, but in the meantime the all merciful Supreme Personality of Godhead, Lord Madhusudana, had become pleased with Lumpaka’s humble offering of forest fruits, and He accepted them. Lumpaka had unwittingly observed a full Ekadasi fast, and by the merit he reaped on that day he regained his kingdom with no further obstacles.

“Listen, O Yudhisthira, to what happened to the son of King Maahishmata when but a fragment of the merit spouted up within his heart.
“As the Sun beautifully rose in the sky on the day following Ekadasi, a handsome horse approached Lumpaka as if seeking him out, and stood next to him. At the same time, a voice suddenly boomed out from the clear blue sky saying, ‘This horse is for you, Lumpaka! Mount it and ride swiftly out of this forest to greet your family! O son of King Maahishmata, by the mercy of the Supreme lord Vaasudeva and the strength of the merit you acquired by observing Saphalaa Ekadasi, your kingdom will be returned to you without any further hindrances. Such is the benefit you have gained by fasting on this most auspicious of days. Go now, to your father and enjoy your rightful place in the dynasty.’

“Upon hearing these celestial words resounding from above, Lumpaka mounted the horse and rode back to the city of Champaavati. By the merit he had accrued by fasting on Saphalaa Ekadasi, he had become a handsome prince once more and was able to absorb his mind in the lotus feet of the Supreme Personality of Godhead, Hari. In other words, he had become My pure devotee.
“Lumpaka offered his father, King Maahishmata, his humble obeisances and once more accepted his princely responsibilities. Seeing his son so decorated with Vaishnava ornaments and tilak (udhvara pundra) King Maahishmata gave him the kingdom, and Lumpaka ruled unopposed for many, many years. Whenever the Ekadasi came, he worshipped the Supreme Lord Narayana with great devotion. And by the mercy of Sri Krishna he obtained a beautiful wife and a fine son. In old age Lumpaka handed his kingdom over to his son – just as his own father, King Maahishmata, had handed it over to him. Lumpaka then went to the forest to dedicate his concentrate attention to gratefully serve the Supreme Lord with controlled mind and senses. Purified of all material desires, he left his old material body and returned back to home, back to Godhead, attaining a place near the lotus feet of his worshipful Lord, Sri Krishna.
“O Yudhisthira, one who approaches Me as Lumpaka did will become completely free of lamentation and anxiety. Indeed, anyone who properly observes this glorious Saphalaa Ekadasi – even unknowingly, like Lumpaka – will become famous in this world. He will become perfectly liberated at death and return to the spiritual abode of Vaikuntha. Of this there is no doubt. Moreover, one who simply hears the glories of Saphalaa Ekadasi obtains the same merit derived by one who performs a Rajasurya-yajna, and at the very least he goes to heaven in his next birth, so where is the loss?”

Thus ends the narration of the glories of Pausha-krshna Ekadasi, or Saphalaa Ekadasi, from the Bhavishya-uttara Purana.

These stories have been summarised and slightly changed, abbreviated or added to from how they are found in the celebrated book, “Ekadasi: The Day of Lord Hari” 1986. HH Krishna Balaram Swami. Bhaktivedanta Institute Press.