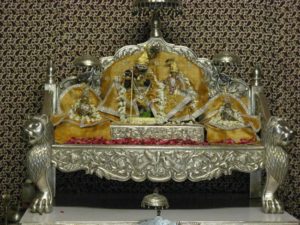 Note: Radha Vinoda files are within “Lokanatha Gosvami” repository, where you’ll find much more about Radha Vinoda (pictures, text and even a video).

Lokanatha receives Radha Vinoda
Before the arrival of Sri Caitanya Mahaprabhu in Vrindavana, Sri Lokanatha Gosvami and Sri Bhugarbha Gosvami came here.
Being very humble and without any possessions (akincana), they performed bhajana at the many pastime places in Vraja-mandala.

Sri Lokanatha Gosvami found the deity of Sri Radha-Vinoda in Kisori-kunda in Umrao Gaon near Chatravana and served Them there. He carried his Deity all over Vraja in a cloth bag hung around his neck.

Later, on the request of Rupa, Sanatana and the other Gosvamis, he brought his worshipful Sri Radha-Vinoda to Vrindavana and began to worship Them near the temple of Sri Radha-Ramana.

Nowadays, the original deity that was worshipped by Sri Lokanatha Gosvami is in Jaipura, and the pratibhu-vigraha is worshipped in that same temple in Radha-Gokulananda Temple in Vrindavana.
Radha Gokulananda Temple is an ancient shrine, located at Vrindavan, in Uttar Pradesh. It is in between the Kesi Ghat and the Radha-Raman Temple.
In this temple there is the small Radha-Vinoda Deities of Lokanatha Gosvami, the larger Deities of Vijaya Govinda of Baladeva Vidyabhusana, and the Radha Gokulananda Deities of Visvanatha Cakravarti. The small Deity of Krishna in front of Gokulananda and the Deity of Caitanya Mahaprabhu were worshiped by Narottama Dasa Thakur. Visvanatha Cakravarti arranged to have this temple built. Formerly, all the Deities in this temple were worshiped alone, in their own temples.

Originally, Visvanatha Cakravarti worshiped the Deity of Gokulananda at Radha Kunda. He then moved to Vrindavana and stayed with Lokanatha Gosvami. Where this temple is located is where Lokanatha Gosvami would do his bhajana. When the original temple of Radha Vinoda fell apart, Visvanatha Cakravarti had another temple built and called it the Gokulananda Temple. Both his Deity of Gokulananda and Radha Vinoda were worshiped here.

Radha Vinode in Jaypura
This is a small temple up some stairs on Tripoliya Bazaar Road. Vinodailal was installed by Lokanath Goswami. He was the first devotee sent to Vrindavan by Sri Chaitanya Mahaprabhu.

He has one famous disciple, Narottama dasa Thakur, who was a great poet and who composed many beautiful Vaishnava songs in praise of the Lord.
Vinodailal is a beautiful Deity about 30cm (12 inches) tall.
When Sri Caitanya took sannyasa, Lokanatha came to Vrindavana. While visiting the places of Krishna’s pastimes, while in the village of Umara in the forest called Chatavana, Lokanatha Gosvami discovered the Deity of Radha-Vinoda.
Lokanatha’s samadhi is just north of the village of Umara, on the bank of Kishori Kunda. The Deity of Radha-Vinoda was revealed to him from this tank. Lokanatha Gosvami used to carry this Deity in a bag hanging from his neck.

Reaching there
It is a very difficult temple to find, as few people come here. From the Radha Damodar Temple you walk to Tripoliya Bazaar Road and make a left. Walk 50 big steps and you will find a flight of stairs to your left. To the right of the stairs is a hose shop, which is shop number 295. If you look at the building, it will not look like a temple. The temple is situated one flight up.