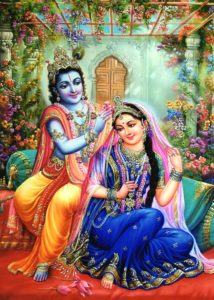 The first, Kaumara, goes from His appearance day to the end of His fifth year. During this period Krishna enjoys affectionate pastimes with His parents. In his Bhakti Rasamrita Sindhu Srila Rupa Gosvami explains that this period can be divide in three sub-divisions: adya, madhya e shesa.

The second, Pauganda, begins from the beginning of the sixth year up to the end of the tenth year. During these years Krishna exhibits lilas with the cowherd boys.
Sri Krishna’s pauganda age also can be further divided into three periods.

The third, Kaisora, goes from the eleventh to the end of the fifteenth year. His friendship with the gopis is exhibited during the age of kaisora. This is Krishna’s eternal age.
His pastimes at Vrndavana are wrapped up by the end of His fifteenth year, and then He is transferred to Mathura and Dvaraka, where all other pastimes are performed.

The fourth, Yauvana, or youth, continues with no change for the rest of His appearance in this world. Although he stayes in this world for more than 125 years, He never gets older than 15 years (to be precise 15 years, 9 months, 7 days).

In every age Krishna tastes different types of mellows (rasa). As He moves from one age to another, His mood and attractions change.
Everytime that he enters in a new phase of His life those changes makes Him look like He is a different person.
Just like our own nature changed since we were 5, 10 or 15, Radha and Krishna pastimes in Kaumara and Pauganda ages are different from the Kaisora.
It’s Yogamaya acting to open new phases and new lilas.

Therefore at the beginning of Kaisora age Radha and Krishna felt like They never met the other and started to develop a strong desire to see each other (milana).
At the right moment, the Gopis begin arranging secret meetings and the first happened in Sanket. All Vaisnavas should visit this Holy place.

Why secretly (guhyam)?
To spice up even furtherly these wonderful transcendental pastimes, at that time Srimati Radharani was married to Abhimanyu and lived in Yavata. Abhimanyu’s mother, Jatila, was doing anything she could to prevent Radharani to meet Krishna, so Gopis like Vrinda and Vira Devi were sending signals (sanket) to Radharani to tell Her if it was safe or not for her to go there to meet Krishna.

These pastimes are wonderful. Pure-hearted devotees will experiment great pleasure in hearing about them.
vayam tu na vitrpyama
uttama-sloka-vikrame
yac chrnvatam rasa-jnanam
svadu svadu pade pade
“One can never be satiated even though one continuously hears the transcendental pastimes of Krsna, who is glorified by excellent prayers. Those who have entered into a transcendental relationship with Krsna relish at every step the descriptions of the pastimes of the Lord.” (Śrīmad-Bhāgavatam 1.1.19)