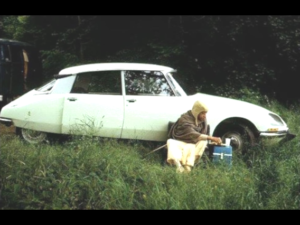 Locanananda Dasa : In La Nouvelle Mayapur, at one point during the five hour drive, we pulled off the road for breakfast prasadam.

Srila Prabhupada was seated on a big folding cushion placed against a Citroen DS, probably the fastest car on the road in France at the time.

A devotee photographer, Bhargava Prabhu, had come along and one of his pictures of Prabhupada sitting on that cushion honoring prasadam appeared in a Vyasa Puja book in a subsequent year.