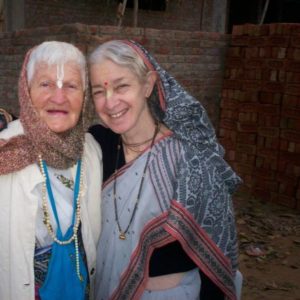 Parvati Devi Dasi was born in the US but lived most of her life in Sri Vrindavana Dhama, where she has a nice house with a very high ceiling. She considered Vrindavana her place so much so that married an Indian devotee and her daughter married one of Gangotri’s son. There is none who has been in Vrindavana who doesn’t know who Gangotri is, arguably the most successful store in Vrindavana.

My debt of gratitude to her is that she didn’t like my reclusive life-style and pushed me to give Bhagavad-gita and Srimad-Bhagavatam classes and to participate more in Vrindavana social life. She was in charge of deciding who gave Bhagavad-gita classes in the evening in Srila Prabhupada house, so often she was calling me and even coming to my house when I did not answer her calls.

In this way at least I came to know somebody there. Thanks to this a puertorican devotee  invited me to come here. When I went back to reside in Vrindavana, another devotee who was coming to my Bhagavad-gita classes invited me back to preach in latin countries.

Parvati was very kind to me, my god-sister and my dear friend.

There is nothing more auspicious than to live in Vrindavana and to leave the body in Vrindavana. There are no words to express this luck.