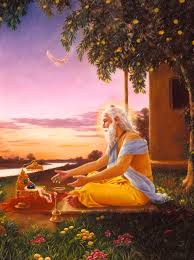 Sripada Madhavendra Puri is the greatest jewel of our parampara. He was the one who brought back Radha Krishna prema-bhakti in this world after it had been hidden away.

After finding la Srimurti of Gopala in Govardhana, the Lord appeared in a dream and asked him to bring sandalwood from the Malaya region to cool Him down, as He was feeling very hot.

It is said that the two great personalities associated more even after Sri Madhavendra continued the travel.