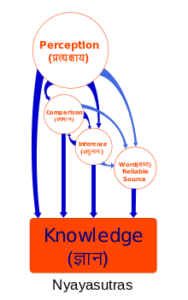 Nyaya is the science of logic compiled by Gautama Akshapada. It is the system that defines the rules of the correct way of thinking, concluding and discussing.

One of the six darsana.
It is one of the six darshana, which are
– Samkhya
– Nyaya,
– Yoga,
– Vaisesika,
– Mimamsa and
– Vedanta.
Their compilars are Gautama, Kanada, Kapila, Patanjali, Jaimini and Astavakra

Codes of logic
In the nyaya sastra, the codes of logic, the six modes of acquiring knowledge are mentioned:
visaya, the thesis,
samgaya, antithesis,
purva-paksa, counter-proof,
mimamsa, synthesis,
siddhanta, conclusion and
samgatih, the verification made by different sources.

In this world, after these six stages, something can arise in the name of truth. Any knowledge presupposes the advice of different sources, although for the most part we can acquire it from a single source. At the beginning we ask many sources about the truth, then we rely on one in particular.

The importance of logic according to Srila Prabhupada
Naya-kovidah. Naya-kovidah means nyaya-nipuna. Bhagavad-dutas, those who are Gosvami, apply everything with nyaya with logic. Their instructions are not blind, dogmatic. Naya-kovidah. Everything that Krsna or his representative says is not dogmas. Those who are not authentic representatives of Krishna offer only dogmas. Just as in every religion there are dogmas. But in the bhagavata religion, bhagavata-dharma, there is no dogma.

The Bhagavata-dharma of Sri Caitanya Mahaprabhu.
The author of the Caitanya-caritamrta, Krsnadasa Kaviraja Gosvami, declares therefore,
caitanyera dayara katha karaha vicara.
Vicara means only trying to understand the gift of Lord Caitanya through logic, vicara. Do not follow blindly. Blindly following something, this does not lead to anything good. It will not remain. One should acquire everything through logic. The sincere servants of God apply everything logically.
Caitanyera dayara katha karaha vicara.
If you study Caitanya’s philosophy with logic and the right argument … Do not proceed with sentimentality. The so-called missionaries simply make false propaganda without any logic. Without any logic … So you have to be smart to understand Krsna’s philosophy or the philosophy of Lord Caitanya with logic and right argumentation. Do not follow blindly. But once accepted, one can no longer argue. You must blindly accept it. But before accepting, it is analyzed logically. But when you accept it, do not go back. This would be a fall. Naya-kovidah.
Srila Prabhupada – Srimad-Bhagavatam 6.2.1-5 Calcutta, January 6, 1971

You find much more on Nyaya in Isvara Archive, included the full Nyaya Sutra book by Gautama Aksapada.