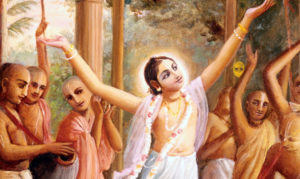 Sri Bhakti-ratnakara 5.2241-2328
Nityananda Prabhu was born in the village of Ekachakra. (Text 2241) His mother was Padmavati and his father was Hadai Pandit. Who can describe the love they felt for their son? He was their breath of life. Padmavati’s blissful son enjoyed many pastimes in Ekachakra. Filled with ecstasy, Nityananda showed the people the pastimes of Krishna’s avataras. The people of Ekachakra were very fortunate. For all of them, Nitai was a treasure more dear than one’s life. Their love for him grew and grew. For twelve years, Nityananda Prabhu stayed in that village. Who has the power to understand Lord Nityananda’s heart? Without Sri Krishna Chaitanya’s association, Nitai could not remain peaceful. One day, Lord Nityananda thought in his heart, ”It is not yet the time for me to obtain him. Sri Krishna Chaitanya is now in Nabadwip. Concealing his true identity, he enjoys pastimes as a child. When he openly manifests his true identity and enjoys pastimes with the devotees, then I will go and meet him. For now I will go on pilgrimage.” Thinking in this way, Lord Nityananda smiled. Soon thereafter, a sannyasi came to that village and, getting directions from the inhabitants, he arrived at Hadai Pandit’s house. Seeing the saintly guest, Hadai Pandit became joyful. In a moment he placed many foodstuffs before him and requested him to eat. The sannyasi said, ”O brahmin, promise that you will fulfill my request, only then I will eat.” Attaining that promise, the renunciate took his meal. Then, at the time of his departure, he asked that Nityananda be given to him. Consoling his father and mother, and with a peaceful heart, Nitai departed with the sannyasi. In this way, Nityananda Prabhu left home. Who has the power to understand his wonderful pastimes?

Nityananda Chandra is in the full bloom of youth. His handsomeness charms all the worlds. A single glimpse of him brings cooling bliss to the eyes. Wherever Nitai, who was filled with divine love, went, the people’s hearts became wild with ecstasy, ran to see him. Showing great mercy to everyone, Nityananda Svarup, the Personality o f Godhead himself, walked like a great king of the elephants. Nityananda Prabhu visited the same holy places he visited as Lord Balaram in Dvapara-yuga. Travelling south, he went to Pandharpur. There, Lord Nityananda saw the deity of Lord Vitthalanath. In that town lived a gentle brahmin who was a godbrother of Madhavendra Puri. Inviting the Lord to his home, the brahmin respectfully offered fruits, roots, milk, and other foods for him to eat. Gazing at Nityananda Rama, the fortunate people of Pandharpur felt their life’s breath filled with cooling bliss. Who can understand the desires in Nityananda Prabhu’s heart? After seeing Lord Vitthalanath, Nityananda stayed in a secluded place. Coming from afar, that brahmin’s spiritual master, Sri Lakshmipati, suddenly came to that village. Seeing him, the brahmin was very excited. Lakshmipati was very old. His glorious activities were beyond description. His fame extended everywhere. He was a great saint, surrounded by followers, learned in all scriptures, who walked on the path of pure devotional service. Who can describe the fatherly love that Lakshmipati felt for his disciples? ke kahite pare lakshmipatira mahima? yaa’ra sishya madhavendra pure — ei sima. Who has the power to describe Lakshmipati’s glories? His disciple was Madhavendra Puri, whose glories were the greatest. (Text 2271) madhavendra pure prema-bhakti-rasa-maya yaara nama-smaraae sakala siddhi haya. Madhavendra Puri was the abode of the mellow of pure love of godhead. The remembrance of his name grants all perfection. (Text 2272) Madhavendra Puri’s disciples, headed by Sri Isvara Puri and Sri Ranga Puri, were all intoxicated with the nectar of ecstatic love. Sripad Madhavendra had many disciples in Bengal, Orissa, and other places. They were all devoted to Krishna and were absorbed in ecstatic love. Madhavendra Puri was famous in the Madhva sampradaya. He was an ocean of good qualities and very dear to his spiritual master. Lakshmipati took his meal at that brahmin disciple’s house. Eagerly he spoke of Lord Krishna. Again and again Lakshmipati said, “I see great auspiciousness has come to your house. I have come to your home many times, but never has such bliss taken birth in my heart! I think a great devotee must be staying here.” To this, the brahmin replied. ”Your mercy is very powerful.”

By Lord Nityananda’s wish, the brahmin did not reveal Nitai’s presence in the house. The day was passed in speaking topics of Sri Krishna. That night, while sitting in his room, the glorious sannyasi Lakshmipati sang songs glorifying Lord Balaram’s pastimes, pastimes that enchant the heart. Absorbed in ananya-bhakti, unflinching love for Balaram, Lakshmipati wept. He prayed:ohe baladeva, mu adhama duracare kara anugrahana — yasa ghushuka saasare ”O Lord Balaram, I am very fallen and ill-behaved! Please be merciful to me. I will sing your glories all over the world.” (Text 2283) Speaking these words, Lakshmipati could not remain peaceful. He rolled on the ground and tears streamed from his eyes. He lamented bitterly. Overcome with powerful emotions, he was speechless and agitated. Suddenly, by Lord Nityananda’s will, he was drawn into sleep. Then, on the pretext of a dream, Nityananda Svarup happily revealed Lord Balaram’s form to Lakshmipati. How glorious was Lord Balaram! Cupid’s pride was crushed. Lord Balaram’s beautiful form rebuked a glistening silver mountain. His arms reached his knees. His chest was broad. Reaching almost to his ears, his large graceful eyes charmed the heart. A single earring on his ear charmed the hearts of the whole world. A delightful bugle-horn was tucked into the left side of the sash at his waist. His body was decorated with many ornaments. No metaphor or simile of this world could describe him. His face conquered the radiance of the full moon. On the pretext of speaking words, he created a flood of nectar. Gently, gently, he said to his dear devotee Lakshmipati, ”When I heard your lament, my heart broke. Krishna is the master of my life. Birth after birth you are his servant.” Grasping Lord Balaram’s feet, Lakshmipati said, ”I pray that in my heart I will never think you are different from Krishna.” Hearing Lakshmipati’s words, Lord Balaram smiled and said, “Wearing the dress of an avadhūta, a brahmin’s son has come to this village. He will become your disciple. With this mantra, make him your disciple.” After speaking these words, Lord Balaram spoke a mantra into Lakshmipati’s ear. Receiving the mantra, Lakshmipati became joyful. After giving his mercy in this way, Lord Balaram disappeared.

Upon rising the following morning, Lakshmipati contemplated the wonderful dream. At that moment, Lord Nityananda Rama arrived. Seeing Nitai’s effulgence, the sannyasi Lakshmipati thought, ”How wonderful is his effulgence! He is no mere human being.” Thinking in this way, with unblinking eyes the wise sannyasi gazed at Lord Nityananda’s handsome face. Falling to the ground, Nityananda Prabhu offered respects at the feet of the holy man. Lakshmipati hurriedly picked him up and embraced him. Again and again, Nityananda Ray begged, ”Please give me diksha and deliver me.” Hearing Nitai’s sweet words, Lakshmipati floated in tears from his eyes and could not remain peaceful. Unable to jump over Lord Balaram’s command, that same day he (Lakshmipati) gave mantra-diksha to Nityananda. After giving him initiation, he embraced Nityananda Prabhu. His heart overflown with bliss. Merciful Lord Nityananda was very dear to Lakshmipati. Nityananda Svarup had the power to do whatever he wished. What did he not have the power to do? In this way, Sri Nityananda Rama, who loves the devotees and who is the root of divine ecstasy, bestowed bliss on the Madhva-sampradaya. An ancient verse describes: nityananda prabhu vande srimal lakshmipati priyam sri madhva sampradananda vardhanaei bhakta-vatsalam I offer my respectful obeisances to Lord Nityananda, who loves the devotees, who is dear to Sri Lakshmipati, and who increases the bliss of the Madhva-sampradaya. (Text 2310) Thus becoming Lakshmipati’s disciple, Lord Nityananda was overwhelmed with astonishing happiness. Lord Nityananda departed at once. No one has the power to understand his wonderful pastimes! In Nitai’s absence, Lakshmipati became filled with sorrow. He did not speak a word to anyone. In his heart he lamented. As night was ending he was drawn into sleep. On the pretext of a dream, Nityananda Chandra appeared before him. Seeing Nityananda Prabhu, saintly Lakshmipati could not stop the tears flowing from his eyes. Suddenly Nityananda manifested the form of Lord Balaram. Seeing this, Lakshmipati immediately fell before the Lord’s glorious feet. He washed the Lord’s feet with the tears from his eyes. Again and again he said, ”Only to trick me have you descended to this world. No one has the power to know you. Even Brahma and all the devas don’t understand you. Only if you reveal yourself can someone know you. Why do you trick a fool like me, a fool worthless like a pile of ashes? O Lord, please be merciful to me. I take shelter of you.” Hearing Lakshmipati’s words, the Lord at once manifested his form of Sri Nityananda. Gazing at the sweet glory of Lord Nityananda’s form, a wonder that eclipsed a host of glistening lighting flashes, Lakshmipati became wild with ecstasy. Then Lord Nityananda Rama gave his mercy to him. Lakshmipati’s desires were now fulfilled. Forbidding him to tell anyone of what had happened, and comforting him again and again, Lord Nityananda Prabhu disappeared. When the Lord was no more visible, Lakshmipati became filled with sorrow. His sleep fled far away and he saw that the night had ended. To whom could he tell anything of this? He could not be peaceful.

From that day his life was filled with wonders. Seeing his condition, his disciples became worried. Leaving the world behind, Lakshmipati suddenly left the field of their vision. Who knows how to describe Lakshmipati’s glorious character and activities? In the world he is famous as a devotee especially dear to Nityananda Prabhu. No one can describe the great devotion of the people in Pandharpur. By Lord Nityananda’s mercy, even today the inhabitants of that village feel very strong devotion to the Lord.