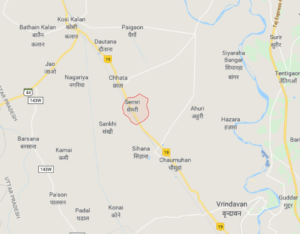 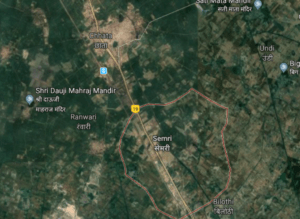 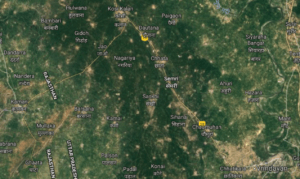 Previously this place was known as Shyama-Kinnari in memory of the pastime where Krishna dressed up as a gopi named Shyama-sakhi just to placate Radha’s mana.
The term ‘mana’ refers to a form of ‘transcendental anger’ or ‘lover pique’
Today, the twin villages of Nari and Semri are situated on either side of the highway from Agra to Delhi and there are very large lakes near both the villages.

At Semari there is presently a famous temple of Durga known as Shyamali Ki Devi, but this is in actual fact the ancient shrine dedicated to Krishna’s pastime here as Shyama-kinnari.

The stringed instrument known as the vina that was being played by Syama-sakhi is also called a kinnari, and that is how the name of the village of was derived.

The Bhakti-ratnakara says:
“This is the village of Narisemari, previously known as Shyama-Kinnari. Seeing no way to break Radha’s angry mood, Krishna took the form of a sakhi named Shyama-sakhi here.”
Once when Radharani was in a very angry mood with Krishna, He cleverly devised a means to subdue Her mana by disguising Himself as a gopi and came before Radharani while playing the vina and singing enchanting love songs.
Due to being overcome with intense emotion and enraptured by the wonderful love songs of the kinnari player Syama-sakhi, Radha took off Her jeweled necklace and placed it around Shyama-sakhis neck.
Turning to Radha, Shyama-sakhi lovingly said.
“Now please give Me the jewel of your anger and accept Me as your own.”
Hearing these words, Radharani immediately realized that the beautiful kinnari player was non-other than Her beloved Krishna.
She became overwhelmed with ecstatic love to see Krishna dressed up as a gopi playing a kinnari and She immediately forgot Her mana.

Location
Driving from Delhi to Vrindavana, passing Kosi Kalan and Chhata, the two villages are on both sides of the highway.