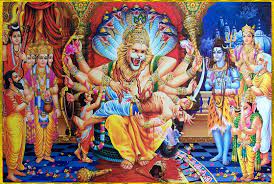 I offer my obeisances to Lord Narasimha, who gives joy to Prahlada Maharaja and whose nails are like chisels on the stone like chest of the demon Hiranyakasipu.

Lord Nrsimha is here and also there.

Wherever I go Lord Nrsimha is there. He is in the heart and is outside as well. I surrender to Lord Nrsimha, the origin of all things and the supreme refuge.

O Kesava! O Lord of the universe! O Lord Hari, who have assumed the form of half-man, half-lion! All glories to You! Just as one can easily crush a wasp between one’s fingernails, so in the same way the body of the wasp like demon Hiranyakasipu has been ripped apart by the wonderful pointed nails on Your beautiful lotus hands.

The Appearance Day of Lord Nrsimhadeva

Since He is everywhere, if you pray to Him to save you, He will come at once and save you as He saved Prahlada Maharaja from Hiranyakasipu. He will take away all of your problems, as He took away all the problems of Prahlada Maharaja. He quickly destroyed Prahlada’s demonic father, Hiranyakasipu, who had been given a boon of immortality. Hiranyakasipu was strong like iron. He was blessed not to die in the sky, by weapons, demons, humans, animals, fire, poison, or any other force of this world. Still, Nrsimhadeva killed him very quickly.

We take shelter of Nrsimhadeva.

If you experience any difficulty or danger in your life, you can chant this mantra. Lord Nrismha surely will save you; He has come only to save you. You can test this. If you are very faithful to Him, as Prahlada Maharaja was faithful, He will take away all your difficulties in chanting, remembering, and becoming a pure devotee. He has come as the embodiment of Krsna’s mercy. So chant this mantra, especially today, and He will protect you from everything inauspicious.

Nrsimhadeva is always greedy to help us. He wants to help us, but we don’t want His help.

It is rare to find anyone who has such faith, and love and affection, for Krsna, as Prahlada Maharaja. Prahlada tried to teach his demonic father this beautiful truth.

Prahlada told his father that those in material consciousness are blind, and they are like dogs. Dogs think that they are intelligent, but they are not.

“Prahlada Maharaja replied: Because of their uncontrolled senses, persons too addicted to materialistic life make progress toward hellish conditions and repeatedly chew that which has already been chewed. Their inclinations toward Krsna are never aroused, either by the instructions of others, by their own efforts, or by a combination of both.”

Some dogs once found a dry bone, which had absolutely no juice. One of the dogs approached that bone, quickly grabbed it with his teeth, and ran away. He then looked back towards the other twenty dogs, who now began to pursue him in order to take that dry juiceless bone away from him. At last they all caught hold of him and began to viciously attack him.

That dog, now full of injuries and blood, gave up that bone. His tail going inside his legs, he watched from the sidelines as another dog, while trying to relish the bone, was also violently attacked.

We are like this. Our fathers and forefathers have tried to take the juice of material enjoyment from this world, tasting only dry bone. If you ask your grandfathers, who are eighty, ninety, or a hundred years old, if they are happy with their life’s accomplishments, they will all say, “No.”

they will reply, “I am now old. I can no longer enjoy the taste of wonderful foods because I cannot digest anything I eat. I am going to die. I am not happy.”

Ironically, their children consider, “Doing what we have seen our fathers and grandfathers do, we will now be very happy.”

Suppose a man thinks, “I will drink a great quantity of wine;” what will happen to him? He will become like a madman. He will faint and fall in a drain, at which time he will think, “I am sitting on a golden throne. I am the monarch of all.” Dogs will approach him, smell his body, and think, “What a good smell!” They will taste him with their tongues and thus wash his face. Thus, there is no real pleasure in worldly objects of enjoyment.

“I cannot kill him. I fear that my death will come from him. It is I who will die.”