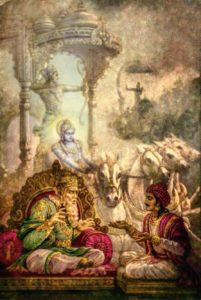 Some devotees seldom use the word ‘mystical’ when describing other worldly subjects, due to obscure hazy connotations; preferring instead to use terms like inconceivable, transcendental or spiritual. Srila Prabhupada quite often used the word in the context of performing sincere devotional service, and the benefits derived from Bhakti.

It is known that Srila Prabhupada had a number of mystical experiences which he would tell to his close friends. Being aware of Srila Bhaktisiddhanta’s order to spread the teachings of Sri Chaitanya Mahaprabhu worldwide, he cultivated a helpless mood. In true humility, he sought help from our previous acaryas, imploring and begging to be a worthy accomplice in this mighty deed. His perfection in chanting bore the results of his sublime characteristics, out of which, the natural mystic power of a vaisnava were displayed for all to see. His writings and deeds attest to this.

The dialogue of Bhagavad-Gita was transmitted as a live commentary from the heart of Sanjaya to Dhrtarastra. Such mystical ability did not require communication masts or radio waves, but the grace of Guru, in this case Srila Vyasadeva. Srila Prabhupada writes: “….one has to understand Krsna not directly but through the medium of the spiritual master. The spiritual master is the transcendental via medium, although it is true that the experience is still direct. This is the mystery of the disciplic succession.” BG.18.75 purport. But that grace has to be earned by purity, “Therefore by the grace of Vyasa, Sanjaya’s senses were purified, and he could see and hear Krsna directly. One who directly hears Krsna can understand this confidential knowledge.”

When Lord Narayana threads a camel through an eye of a needle, it is a normal occurrence for Him. When a self-understood vaisnava is observed, no-one can understand. Lord Chaitanya says: “Even the most learned man cannot understand the words, activities and symptoms of a person situated in love of Godhead.” CC.Mad.23.39. Yet the process of Bhakti-yoga entails we become yogis of the highest order – sa me yuktatamo matah – the highest of all, BG.6.47. So what is this understanding? Can we witness any ‘mystical’ happenings?

Every day of a disciple’s life is witness to an ongoing mystical process. For instance, quite often one’s spiritual master is away on preaching duties, perhaps half a planet away. In other cases, the Guru has departed from this mortal world for Goloka Vrndavana or to assist his spiritual master in further sankirtana activities elsewhere. When a sincere disciple prays to the Guru during Guru-puja, or silently seeks his blessings before undertaking any activity like chanting japa and so on, he invokes the Guru’s presence, which is not limited by time or space. Did Srila Prabhupada not say that he always felt the presence of his Guru Maharaja? This mystical calling is borne by Krsna who is Yogesvara, and as the Supreme Guru, is unceasingly maintaining the background of the Guru/disciple relationship – as in eternity. He bridges any apparent divide. Lord Chaitanya said to the brahmana Kurma; “If you follow this instruction [to preach], your materialistic life at home, will not obstruct your spiritual advancement. Indeed, if you follow these regulative principles, we will again meet here, or, rather, you will never lose my company.” Furthermore, when glorifying the Guru, a disciple sings – jamne jamne prabhu sei – that you are my Lord and Master birth after birth, and – Divya jnana hrde prokasito – the Guru fills the heart with transcendental knowledge. Evidently, the simple act of following is the key to understanding. Did Srila Prabhupada relate his mystical experiences in his writings? He certainly did.

The famous verse from Svetasvatara Upanishad 6.38. – Yasya deve para bhaktir….is translated as “Only unto those great souls who have implicit faith in both the Lord and the spiritual master are all the imports of Vedic knowledge automatically revealed.” The interesting word here is, ‘automatically.’ The word – prakasante – means, are revealed, or revelation. Why does Srila Prabhupada put the word – automatically when it appears there is no need to do so? because it is a product of vijnana. Srila Prabhupada has been blessed with many ‘mystical’experiences which come of their own accord. This can be substantiated by looking at the purport to BG.9.2. This important verse, “This knowledge is the king of education, the most secret of all secrets. It is the purest knowledge, and because it gives direct perception of the self by realization, it is the perfection of religion. It is everlasting, and it is joyfully performed” highlights the workings of automatic revelation. Pratyaksa – means, by direct experience, and avagamam – means, understood. Srila Prabhupada describes the previous life of Sri Narada Muni. He quotes Vedanta Sutra – 3.2.26 – prakasas ca karmany abhyasat – with the formal ‘Devotional service is so potent that simply by engaging in the activities of devotional service one becomes enlightened without a doubt.” He then explains how the disqualification as a young child was overcome by the mother’s service to the great sages, and the eating of very potent prasadam, enabled the boy to become enlightened. Srila Prabhupada now writes his vijnana on the same Vedanta Sutra verse – ‘Therefore, as described in the Vedanta Sutra, prakasas ca karmany abhyasat: if one is simply engaged in the acts of devotional service, everything is revealed to him automatically, and he can understand.’ The consistent use of the word automatically means mystical revelation. Of course, pratyaksa is not a valid means of acquiring knowledge, but it is synonymous with what Srila Jiva Goswami calls – vaidusya pratyaksa – which means mystical revelation, and is infallible.

As we advance in spiritual life, little glimpses of Absolute Truth are revealed to us. Krsna enables us to understand Him by lessening the mystery, by allowing us to – enter into the mystery of My understanding – BG.11.54. Other than what Krsna says about Himself in Bhagavad-Gita, not much is revealed about Him.

He tells everyone to fully surrender, because His omniscience knew that after His departure from this world, the Srimad Bhagavatam would – puranarko ‘dhunoditah – the Srimad Bhagavatam will be as brilliant as the sun, arising just after His departure, SB.1.3.43, and which – puranam brahma-sammitam – be the incarnation of Himself, SB.1.3.40, in which we can learn all we need about the personal attributes of Krsna.

The most potent way of receiving revelation, aside from associating with pure devotees, is to chant. In science, in quantum physics to be precise, where at any given time, sub-atomic particles appear causelessly out of a quantum vacuum, usually to be negated by their anti-matter counterparts. So out from the quantum fullness of the holy name can come gifts of revelation and understanding. It does not require any material qualification to benefit at all. If Srila Gaura Kishora dasa Babaji was illiterate, so how was he able to, when necessary, preach such high profound Krsna conscious philosophy? He was blessed with understanding which supersedes all mundane or even average spiritual knowledge.

Though we are certainly not mystic yogis of any kind, the simple act of following in the footsteps of the previous acaryas will guarantee we experience more than any other practitioner can ever imagine. How? because those great souls have – dharmasya tattvam nihitam guhyam – the solid truth of religious principles is hidden the heart of an unadulterated self-realized person, Mahabharata, Vana Parva 313.117, and at any time they choose, they can fill our own hearts with mystical understanding should they feel inclined, and such knowledge would be – the mature fruit of all mysticism – BG.4.38. How they do so from wherever they may be is inconceivable, but of course, threading a camel through an eye of a needle is as easy as a mystical understanding of this fact, is a mystical reality!