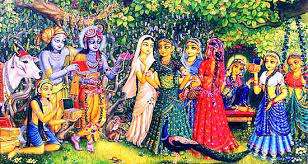 Once, on the occasion of Diwali, Radharani and the gopis came to sit here in Malyahari-kunda and began to put on necklaces made of pearls, so that they could decorate their cows there. Knowing this, Krishna also came here and seeing the wonderful pearls, he asked some of them to the gopis in order to decorate his favorite cows, named Harina and Hasini.

Although Krishna repeatedly asked the gopis for some pearls, they ignored Him.

Finally Lalita told Krishna that she could only find a broken pearl and that it was the perfect pearl to decorate her cows.

Feeling very upset about the behavior of the gopis, Krishna told Lalita that he would cultivate his pearls and, in a feeling of anger, ran away to look for mother Yasoda. Krishna asked Mother Yasoda to give him some pearls so that he could plant them in a garden. Mother Yasoda laughed at Krishna’s request and informed him that pearls do not grow on trees but come from oysters, which live in the sea.

Regardless of Mother Yasoda’s words, Krishna demanded that she give him some pearls. Mother Yasoda found some pearls for Krishna and He immediately went to plant them near the bank of the Yamuna River.

Then Krishna sent his friend Madhumangala to beg for some milk from the gopis, so that he could water his pearl garden. Upon hearing Madhumangala’s request, the gopis all began to laugh.

After a while, Mother Yasoda brought some milk and Krishna went to water her pearl garden.

In a few days, small green shoots began to appear and when Krishna referred him to the gopis, they simply laughed at him, saying that they were only shoots of thorny bushes.

After other days, the shoots became creepers covered with beautiful multicolored pearls, which gave off a very sweet aroma throughout the land of Vrindavana.

Then Krishna began making fun of the gopis, claiming that His pearls were much larger and brighter than their pearls.

Then the gopis wanted some of Krishna’s beautiful pearls, but Krishna refused.

Then the gopis decided to cultivate a pearl garden too. They collected all the pearls they had at home, as well as those that decorated their bodies and planted them all in a garden. Three times a day, the gopis watered their pearl garden with large quantities of milk, ghee and butter, thinking that they would produce better pearls than Krishna’s. Unfortunately, no pearls grew and only thorny bushes appeared in the gopi garden.

Krishna came there with His shepherd friends and began to laugh at the gopis. Just to make the gopis angry, Krishna began to decorate all the cows, buffaloes, goats and sheep with the most beautiful pearl necklaces, of exquisite workmanship. Even the monkeys all received wonderful pearl necklaces. However, Krishna did not give a single pearl to the gopis.

As the gopis were unable to produce pearls in their garden, they became anxious at the thought that their elderly relatives would punish them for taking all the pearls they had at home and for burying them in the ground. The gopis decided to send Candramukhi and Kanchamalata, with a large amount of gold, to buy pearls from Krishna. However, Krishna refused and informed her that each gopi would have to come individually to trade the pearls.

All the gopis decided to go to Krishna except for Radharani, who hid nearby. The gopis were very keen to buy all the pearls but Krishna gave only the smallest pearl to Visakha for Radharani and told her that if she did not pay immediately, she would be arrested and locked up in Krishna’s private garden.

Krishna’s friend Subala, who acted as mediator, asked Krishna to establish a fair price for the pearls and, opening the box, showed the gopis all those beautiful pearls.

Then the gopis began to bargain with Krishna on the price of pearls and, being unable to reach an agreement, they left with Radharani at Radha-kunda.

In great ecstasy, Krishna began to thread all the pearls with his own hands, making beautiful necklaces, chose the most beautiful necklaces and placed them in a gold box. On top of the box, he engraved the name of Radharani. Krishna prepared similar boxes for all the gopis and sent them as a gift.

Radharani was overwhelmed with joy at receiving the fabulous gift of pearls and immediately sent Krishna some delicious preparations that she had personally cooked, along with betel nuts and scented garlands.

The gopis returned to their homes in great happiness, wearing the wonderful pearl necklaces. All the elders were greatly surprised to see them return home adorned with so many fabulous and expensive pearls.