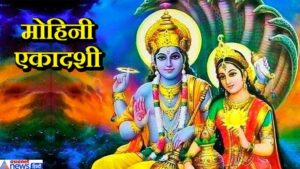 The glories of Mohini Ekadasi which occurs during the waxing moon in the month of Vaisakha are told in the Surya Purana.

Once Maharaja Yudhisthira asked Lord Krsna,
“O Janardana! Pray tell me, what is the name of the Ekadasi that occurs during the waxing Moon in the month of Vaisakha. Please describe unto me the most meritorious benefit one may receive by such observance.

Sri Krsna replied: “O most merciful King, son of Dharma personified! Please hear Me attentively as I describe unto you the story that the great sage Vasistha once told to Lord Ramacandra.

“One time, long ago Lord Ramacandra appealed to the sage Vasistha
‘O respected and knowledgeable sage, I am feeling such separation from Sita devi and am therefore in the most honorific distress. She is the daughter of king Janaka and is appalling my mind with intense hankering. Please kindly explain to Me the great and merciful vow which I can follow and by which will mitigate all one’s sinful reactions and distresses.

“The greatly realized sage Vasistha replied:
My dear Rama, Your intelligence is sharp and mixed with faith. Moreover, your question is beneficial in a way hitherto unknown, to all humanity. Just by chanting and remembering Your all auspicious qualities, all living entities can become purified and eligible to achieve liberation. Still, for the benefit of the public at large, I will describe to You about a great vow.

“O Lord Rama the Ekadasi that occurs during the waxing Moon in the month of Vaisakha is famously renowned as Mohini Ekadasi and is most beneficial to all. By following this Ekadasi all one’s sinful reactions are annihilated and one receives great purity of speech and mind. One’s network of illusion is vaporised, and the grey veil of despair drifts away. Please hear attentively as I describe the topics regarding this wonderfully marvellous Ekadasi.

“There was once an exquisitely beautiful city named Bhadravati, situated on the banks of the sacred river Sarasvati, which was ruled by a king named Dyutimana. O Lord Rama, this king was born in the dynasty of Candra (the Moon) and he was tolerant and truthful; and wore a broad smile.
There was a pious and prosperous devotee of Lord Visnu named Dhanapala who also lived in that city. He was a Vaisya (mercantile community) by profession. For the benefit of the ordinary people this devotee Dhanapala built many dharmashalas or guest houses, schools, temples of Lord Visnu, charitable hospitals, wide roads and market places. He also made arrangements for distributing water and foodstuffs. He dug wells for cool drinking water and ponds for clear water, he also built gardens for flowers and fruits. In this way he properly utilized his wealth for the benefit of all and thus successfully demonstrated the true meaning of his name.

This pious devotee of Lord Visnu who was always peaceful, tolerant, determined and compassionate engaged in devotional service to Visnu, had five sons named: Samana, Dyutimana, Medhavi, Sukriti and Dhrstabuddhi.
His son Dhrstabuddhi was most sinful. He was extremely wicked and ill natured, always engaged in bad association and having illicit connection with unchaste women. He was also killing and torturing other living entities. In this way he engaged in all kinds of sinful activities. Although the son of a most chaste and fortunate father he squandered the wealth of his family and brought ill repute to his caste. He never showed respect to the demigods, guests, old forefathers or brahmanas. He was constantly engaged in thinking of committing sinful activities and thus lived a contemptible life. The sinful wretch misused all his fathers wealth in many useless activities. He always ate abominable foodstuffs and remained always absorbed in drinking wine.
One day on seeing his shameless son walking in a public place with his hand on the shoulder of a prostitute, Dhanapala became extremely hurt. On that very day he was degraded from his position in caste society and the pious community and became an object of hatred for everyone.

“After being thrown out from his father’s house, Dhrstabuddhi continued his sinful propensities with the money he received by selling his personal clothes and ornaments. Soon that also came to an end and gradually, due to lack of sufficient food, his body became weak and skinny. He was a most forlorn and presupposed wretch. On realising that he had become poor, his so-called friends left him, condemning him on various pretexts.

“Dhrstabuddhi was now full of anxiety, his words faltered and his mind was most horrifically agitated. He became afflicted with hunger. So he began to contemplate, “What should I do now? Where should I go and by what means will I survive? After meditating in this way he decided there was no other means to earning his living but stealing.”
So with a desire to steal he wandered throughout the city of Bhadravati. Sometimes the kings guard would arrest him and after careful consideration of his fathers greatness he would release him. After being caught and released in this way many times, he was once again formally arrested for committing a special kind of theft. He was again taken to the King who awarded him severe punishment.
The King said, ‘O sinful foolish creature you cannot stay within this kingdom any more for you are the greatest sinner. I am releasing you for now, but you must leave this city and go wherever you so desire.”

“Dhrstabuddhi, afraid of being punished again, left the kingdom. He went far away and entered into a dense forest. There were creepers and vines, tall trees and moss in the jungle-like forest. Within the forest he became so afflicted with hunger and thirst that he began to kill beasts and birds indiscriminately. For many years he wandered throughout the forest like a hunter, holding a bow and arrows in his hands and killing innocent animals and engaging in sinful activities.

“Dhrstabuddhi was always miserable and anxious, but one day, due to some past pious deeds, he arrived at the sacred asrama of the great sage and ascetic known as Kaundinya. It was the month of Vaisakha (April/May) and the great sage Kaundinya was just returning home after taking bath in the Ganges. At that time by providence, Dhrstabuddhi, who was very aggrieved by distress and lamentation, happened to touch a drop of water falling from the sage’s cloth. Dhrstabuddhi was immediately relieved of his sinful reactions. With folded hands and great humility he said to sage Kaundinya,
‘O great brahmana, I am the most sinful person. There is no sin that I have not committed. Now please instruct me about a topmost type of atonement which a wretched person like myself can easily perform. As a result of committing unlimited sinful activities till now I have been bereft of my house, wealth, relatives and friends. I am drowning in the ocean of mental agony.’

“After hearing these statements of Dhrstabuddhi the great sage Kaundinya, feeling distress by seeing another’s distress, said,
‘I am telling you a sublime method by which all your sinful reactions can be easily refuted, in a very short time; please hear me attentively. Mohini Ekadasi which occurs during the waxing moon in the month of Vaisakha (April/May,) totally destroys a mountain of sinful reactions as big as Mt. Sumeru, which have been accumulated from many many lifetimes. Therefore you should faithfully observe this Ekadasi.”

“Hearing these words from the great sage, Dhrstabuddhi became joyful and properly observed that Ekadasi according to the rules and regulations instructed by the sage. O best of kings! By observing this Mohini Ekadasi the most sinful Dhrstabuddhi soon became devoid of all sinful reactions, and after assuming a divine body he returned to the all-auspicious abode of Lord Visnu by riding on the back of Garuda. O Ramacandra! This vow certainly removes all kinds of illusion and the darkness of ignorance. Any piety accumulated by taking bath in the holy waters, giving in charity and performance of sacrifice cannot be compared with the piety one attains by observing this Mohini Ekadasi

NOTE:
If the holy fast falls on Dvadasi, it is still called Ekadasi in the Vedic literature.
Furthermore, in Garuda Purana (1:125.6), Lord Brahma states to Narada Muni:

“Oh brahmana, this fast should be observed when there is a full Ekadasi, a mixture of Ekadasi and Dwadasi, or a mixture of three (Ekadasi, Dwadasi, and Trayodasi) but never on the day when there is a mixture of Dashami and Ekadasi.”
This is also upheld in the Hari Bhakti Vilas, Vaishnava smriti shastra, and upheld by Srila Bhaktisiddhanta Saraswati Thakura Prabhupad in his Navadwip Panjika introduction.