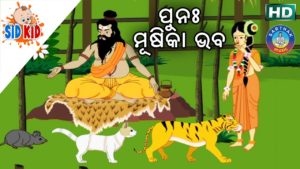 A mouse was very much harassed by a cat, and therefore he approached a saintly person to request to become a cat.

When by the grace of the saint he became a tiger, he stared at the saintly person, who then asked him,
“What do you want?”
The tiger replied,
“I want to eat you.”

Then the saintly person cursed him, saying, “May you again become a mouse.”

By the blessings of the saints we become strong with knowledge and spirituality, but then if we think that now we can disregard or not respect them enough, the result will be that we loose everything and go back to the miserable state that we had before encountering them.