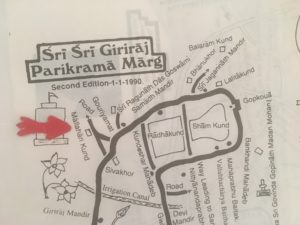 This is the kunda where the famous pearl pastime took place that has been described in Raghunatha Dasa Goswami’s book Mukta-charita.

One day, Krishna came to this kunda and saw that the gopis were making garlands and necklaces from very fine and beautiful pearls, and He asked the gopis for a few so that he could decorate His favorite cows.

Unfortunately, the gopis refused to give any of their pearls, and so in an angry mood, ”

Krishna ran off to find mother Yashoda. Krishna requested mother Yashoda to give Him some pearls so He could plant them in His garden and grow pearls that would be far superior to the pearls of the gopis.

Mother Yashoda smiled and informed Krishna that pearls do not grow in gardens, but come from the sea.

Ignoring His mother’s words, Krishna took the few pearls that His mother gave Him and left to plant them in His garden.

Every day Krishna went to the garden and watered the pearls with cow’s milk provided by mother Yashoda.

Within a short time a few green shoots started sprouting from the ground and Krishna joyfully informed the gopis about the shoots appearing in His pearl garden.

On hearing Krishna’s words, the gopis simply laughed, saying that the shoots were not pearls but only thorn bushes. 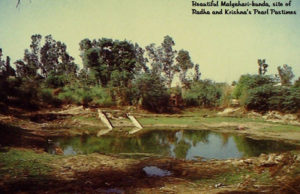 Within no time the shoots soon turned into creepers covered with fabulous multi-colored pearls that shone as brightly as the moon.

Krishna then ran to inform the gopis about His fabulous pearls, saying that they were far superior to the dull looking pearls of the gopis.

When the gopis saw Krishna’s pearls, they were overwhelmed by the exquisite beauty of the pearls and requested Krishna to give some of His pearls to them, but He flatly refused.

The gopis then decided that they would plant their own pearl garden, and after collecting all the pearls from their parent’s houses, they planted them in a garden.

Three times a day the gopis watered their pearl garden with milk, ghee, yogurt, and butter, thinking that this would produce even better pearls than what Krishna had grown in his garden.

When green shoots appeared in their pearl garden the gopis were very happy, but that happiness was short-lived and soon changed to sadness, when only large thorn bushes grew from the shoots.

Krishna arrived there with His cowherd boyfriends and started laughing at the gopis very costly thorn bushes.

Then in front of the gopis, Krishna then began distributing His wonderful pearls amongst His cowherd boyfriends, who then began decorating their cows, buffaloes, and even their goats, with garlands of beautiful pearls.

Even the monkeys in the trees were given a share of the fabulous pearls, but the gopis were not given even one.

Because the gopis had taken all the pearls from their homes, they were now in trouble with their elders due to having lost everything in their failed pearl garden.

The gopis tried everything to get some pearls from Krishna and even agreed to pay, but after haggling for some time over the price, Krishna ultimately refused to sell the pearls.

Krishna then secretly began making pearl necklaces for each of the gopis, selecting the very best for Radharani.

Krishna then put Radha’s pearl necklace into a golden box and after engraving Her name on the top of the box, sent one of His boyfriends to deliver the fabulous pearl necklaces to Radharani and all the other gopis, who were overjoyed to receive such a gift of exquisite pearls.

They in turn sent many gifts to Krishna out of happiness.

When the gopis returned to their homes wearing the high quality and opulent pearl necklaces, their elders became very happy to see their good fortune.

It is said that the gopis, after picking flowers at Kusuma Sarovara, would come here and make them into garlands. Malyahari Kunda is a small kunda. There is a sweet water well next to this kunda called Malyahari well.

At this place Krishna and the gopis had a pastime here which involved pearls. This pastime is described by Raghunatha Dasa Gosvami in his Sri Mukta Charita. Krishna told this story to one of His wives in Dwarka, Satyabhama. Krishna came to Malyahari Kunda and saw the gopis stringing pearl necklaces. He asked Radharani and the gopis to give Him some pearls to decorate His favorite cows, who were named Harini and Hasini, which they refused to do. Lalita Devi told Him that she did not have even one pearl suitable for decorating His cows.

I went home and asked Mother Yasoda for some pearls to plant a garden. She laughed and told me that everyone knows that pearls come from oysters. She eventually gave me some pearls and I planted them in a field. After a few days, some creepers grew, which began to produce some big pearls. The gopis wanted some of these pearls, but I did not give them even one of them.

The gopis then tried to grow their own pearl garden. They collected all the pearls they had, not even keeping one, and planted them in a field. Not even one pearl grew. Fearing that their elders would punish them the gopis came to me and asked me for some of my pearls. I told them that they would have to come individually. At first we could not reach an agreement for me to give them some pearls.

Krishna then strung some pearls into necklaces and put them in golden boxes. He gave the first box to Radharani and then sent a box to all the gopis. In return, Radharani sent Krishna some scented garlands, betel nut, and some food that She personally cooked.

Getting there- If you are doing Govardhana parikrarna, you reach here by making a left onto the path just before Siva Khor Kunda. You walk to the end of the road and make another left. A short distance down the road, on the left, is Malyahari Kunda. To get here from Radha Kunda you first go to the Radha Kunja Bihari Temple. From the Radha Kunja Bihari Temple you walk 40m (120 ft) back-wards on the Govardhana parikrarna path. You turn right onto the cobble-stone road, which is just after a big tree surrounded by a low stone wall, on the right hand side of the road. When the road bends to the right after 250m, on the left side is Malyahari Kunda.