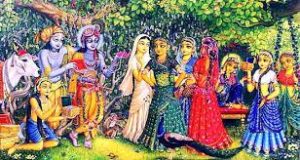 In Ciksauli, Krishna and His friends broke into one gopi’s house and sat inside eating yoghurt etc. The gopi saw Them through the window, so locked them all inside and went to get other gopis.
Krishna realized they were locked in, and they all escaped through window, but not Madhumangala, who was too fat and got stuck in the window. The Gopis came and saw that everyone gone, but saw the rear part of Madhumangala remaining stuck in the window.

They first beat his butt and after took him out and tied his sikha to a rope, hung it over a branch and pulled. He screamed for Krishna, “help, help”. The place where the Gopis hung Madhumangala to a rope is in Krishna Kunda.

Krishna came and told the gopis they had committed a grave sin by harming a brahmana, and as a result they would all be finished.

The Gopis apologized and offered to do whatever he wanted.
Madhumangala said he would like a special asana made and they should bring him laddus and he would forgive them and give his blessings so that all their desires would be fulfilled. This place is known as Madhumangala seat and still is in Krishna Kunda.

They all desired to be with Krishna so they were happy to comply.
Madhumangala ate so many ladhus he got into a very good mood, very jovial, as people do after they have had a big feast, particularly sweets, and gave many benedictions.