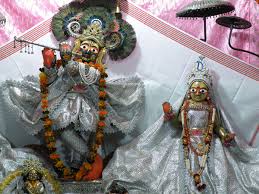 History of the Deities

“After Lord Sri Krishna left this world, Maharaj Yudhishthira, unable to bear the separation from the Lord, also decided to leave the world. Before leaving, he coroneted Maharaj Parikshit as the emperor of the world, and the great grandson of Lord Sri Krishna, Vajranabh, as the king of Mathura.

Vajranabh was requested by the great devotees to restore the glories of Vrindavan. So Vajranabh decided to excavate those holy places of Vraja bhumi in which Lord Sri Krishna had performed His Lila, and to install beautiful and sacred deities in principal places of Vraja Dham. He sat on the banks of Yamuna under a Kalpavriksha (desire tree) and prayed to Sri Sri Radha and Krishna. By the auspicious mercy of that Kalpavriksha tree, Radha and Krishna’s mercy entered his heart and revealed to him the holy places of Sri Krishna’s Lila. Later when he decided to install Deities, he called Vishwakarma, the architect of the demigods. The three principal Deities carved by him were Radha Madanmohana, Radha Govinda and Radha Gopinath.

“For a long, long time Madanmohana performed His Lila of being un-manifested in this world. When the dear and intimate associate of Sri Chaitanya Mahaprabhu, Sri Advaita Acharya, descended in this world, he traveled to many holy places. When he lived in Vrindavan, he was staying on the banks of Yamuna under a tree that is today called Advaita Vat. There Sri Madanmohana, who is also known among Gaudiya Vaishnavas as Madan Gopal, revealed Himself to Sri Advaita Acharya. Before leaving Vrindavan, Sri Advaita Acharya, with great love, entrusted the worship of Madan Gopal to one very pure hearted Brahman in Mathura of the name Purushottam Chaube. This great devotee, who was completely free from all material inclinations, worshipped Madan Gopal in the intimacy of his own child.

Later Sanatana Goswami came to Vrindavan, on the order of Lord Chaitanya. He lived as a simple beggar in the forest of Vrindavan. Every day he would do Madhukari – go house to house and beg a little prasad. In Vrindavan, the staple food is roti, so he would take one roti from each house. When he would be visiting these people, he would often be invited inside to lead the kirtan and share with them the transcendental teachings of Sri Chaitanya Mahaprabhu.

Once when he was begging in the town of Mathura, he noticed something very peculiar. Sriman Purushottam Chaube invited him inside his house and said, “I will give you nice prasad Sanatana, let me just take it from the altar of the Deity.” Right before the eyes of Sanatana Goswami, Purushottam Chaube began to chastise the Deity just like his own child, “Why are you not finishing the food I am giving you?” He even picked up a stick and threatened to punish the Deity of Krishna. When Sanatana saw this, being the author of Hari Bhakti Vilas, which is the most authoritative book describing the proper process of Deity worship, he told the Purushottam Chaube, “The Deity of Krishna is non-different from Krishna Himself. He is the Supreme Personality of Godhead, the Absolute Truth, and the cause of all causes. He must be approached with great reverence and devotion. Not that you treat Him like your own child.” Purushottam Chaube being very humble apologized and said, “I am sorry. Now by your great mercy I have understood the proper process of worshipping the Deity.”

That night that beautiful form of Madanmohana appeared to Sri Sanatana Goswami. Madanmohana told him, “My name is Madanmohana, and many years ago I was installed by the great grandson of Krishna, Vajranabh. But over the period of thousands and thousands of years, I have ultimately been given to the care of this great brahmana, Purushottam Chaube. He is a pure devotee and worships me in the vatsalya-rasa. He considers me, in his pure love, to be his own child. But now that you have trained him in a very formal process of archana, I am not very satisfied. So very soon this brahmana will come and he will give this transcendental form of mine to you, as dakshina. You should worship me with great care and great love as your life and soul.”

In this way Madanmohana came under the loving care of Sanatana Goswami.

But how did the deity of Srimati Radharani appear?

“The devotees understand that Srimati Radharani is the empress of the heart of Govinda, Gopinath, and Madan Mohan. Therefore, the Goswamis would worship Srimati Radharani, the supreme object of all their veneration, within the heart of the Deity. In this way, they worshiped Radha Govinda, Radha Madan Mohan and Radha Gopinath. The son of king Prataprudra in Jagannath Puri, Purushottam Jana, felt that if the common people could visually see Srimati Radharani, they would be very pleased. He very much wanted that Govinda Dev and Madanmohana be worshiped along with Srimati Radharani. Therefore, he sent two beautiful deities of Srimati Radhika to Vrindavan with many devotees. When this entourage of devotees arrived in Vrindavan with the Deities, all the Vrajavasis were most joyful. There was a grand festival to welcome them.

Then the pujari of the Madanmohana Deity had a dream. In that dream Srimati Radharani appeared to him and explained, “The person who sent these deities did not know, but one of the deities is me, Sri Radhikarani, and the larger Deity is Lalita Sakhi. Lalita Sakhi should be installed to the right of Sri Madanmohana, and the Deity of Myself, Sri Radhika, should be installed to the left”. This pujari had such a pure heart that everyone had complete faith in him. He revealed this dream to the vrajvasis and all the Goswamis, and they all accepted the wish of Srimati Radharani. A grand installation took place at the temple of Sri Sri Radha Madanmohana and the deities were installed according to their desires.”