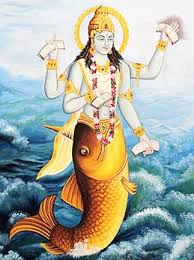 The verse refering to Lord Matsyavatara’s size is in the 8.25.44 of the Srimad-Bhagavatam.
The word indicating how big He was it is niyuta-yojanah. The word niyuta doesn’t refer to any specific number but indicates a “very large number”. However some dictionaries says that niyuta may also mean “a million”. A yojana is about 8 miles and therefore a niyuta-yojanah is 8 millions miles which is a little less that 13 million kilometers.
Srila Prabhupada accepts this calculation in his commentary and so do we.

Lord Matsyavatara appeared at the end of Caksuka Manu where there is a partial flooding of the universe. Although Sripada Sridhara Svami stated that there is no devastation after each Manu, Sri Jiva Gosvami has given definite proofs from authoritative scriptures (like Visnu-dharmottara, Markandeya Purana, Harivamsa, etc.) that there is always a devastation after the end of each and every Manu. Srila Visvanatha Cakravarti has also supported Srila Jiva Gosvami, and he (Sri Cakravarti) has also quoted from Bhagavatamrta about this inundation after each Manu.
Our Srila Prabhupada says the same and so we accept it.

The huge size was possible because the partial devation was on the entire universe and not only in our planet.