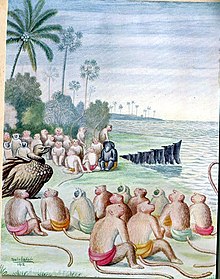 Vanaras are created by  Brahma to help  Rama in battle against Ravana. They are powerful and have many godly traits. Taking Brahma’s orders, the gods began to parent sons in the semblance of monkeys (Ramayana 1.17.8). The Vanaras took birth in bears and monkeys attaining the shape and valor of the gods and goddesses who created them (Ramayana 1.17.17-18). In spite of Valmikiya Ramayana and Tulasidasa’s Ramcharitmanas establishing Hanuman’s greatness and achievements in the domains of physical valor, intellectual character, tender humanism and spiritual excellence, it is not possible for many to get rid of the monkey-figure associated with him.

His figure with a long tail that wags so often, indicates to the ignorant souls a lower stage in Darwinian evolutionary process, a sub-human condition. However, nothing can be further form the truth. Consider the following explanations and form your own opinion whether Hanuman was Nara (human being) or Vanara (monkey) :

1. In the Ramayana the various warlike races have been described by the Vanaras(monkeys), the Bhaloos (bears) and the Rakshasas (demons). These races used to don masks not only on their heads, but on their entire bodies to look more formidable to their enemies. Some of them were past masters in personification and disguise, and once they assumed the chosen form, they were beyond recognition. It is evident from reading the Ramayana that secret of such an art was known to Hanuman. However, some of the

Rakshasas also were well versed in that art. For example, Maricha assumed the form of the golden deer to allure Janaki, the wife of Rama. Ravana too disguised himself as a mendicant, when he appeared in Panchvati and kidnapped Janaki.

2. Hanuman was a complete master of yogic powers, so much so that he could confer the same on others. There are cases on record that even in the present age, a yogi with his siddhis can assume any form. Since Hanuman could change his form at will, he did so to suit the occasion. He appeared before Rama and Laxamana at Rishyamuka and before Vibhishana in Lanka, in the form of an ascetic or a learned Brahmin, before Janaki in a diminutive form. He looked formidable to his adversaries and dreadful when he sacked Lanka. His tail played an integral part in the burning of Lanka.