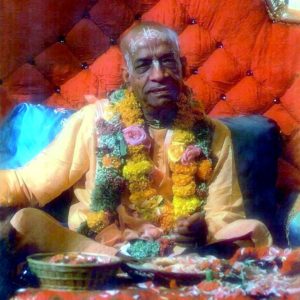 Few days ago I received a request to answer two questions:

1) Do we have to first take birth in a Krishna-lila in order to go back to the spiritual world?
2) In a material body is it possible to experimenting prema?
My answer was quite short, certainly it would have deserved much more space.

The same day a devotee sent me a page of a book contradicting my answers. In this book a devotee fabricates characters and make them say things that should be confirmed by the highest authorites.

I took that as an excuse to talk about the principle of authority.

Our senses, our mind and intelligence are authorities. We can establish what is right and what is wrong with those. However, while for certaing things we do not need to have an avatar to tell us what to do, certainly indriya, manas and buddhi have serious limitations.

Therefore to ascertaing principles of truth on topics like the Supreme Personality of Godhead, the spiritual world and the like, in other words subjects we can’t perceive with our senses, we need higher authorities.

What follows is the very brief dissertation on a theme that it’d require much more space.

Guru is each of us spiritual master. There are various types of Guru, the most important are the diksa-guru (the initiating) and siksa Guru (the instructing).
The Guru must be qualified or he is not a Guru.

Sastra is the Scriptures. A book is called Sastra if it is written or spoken by the Supreme Personality of Godhead or by a pure devotee. Otherwise it doesn’t have the right to be called sastra.

You find a much larger classification of what sastra is in my incoming book “Brilliant As The Sun”, which is on the proof-reading stage right now.

But the perfection of the book very much depends on the translator and the commentator.
A book translated by a professional translator or explained by someone who thinks that the Puranas are “legends” is useless and actually harmful.
I may have a perfect english and a perfect spanish, but if I never played chess even once I definitely should not try to translate a book on this game.
One should read a book translated and explained by someone initiated and instructed in a bonafide Sampradaya and that spent his entire life studying and practicing this culture.

Sadhu is the sage, or the holy and erudite person. It is the most misunderstood amongst the three.
Sadhu is not any devotee you find in a temple or in India. For us a Sadhu is Rupa Gosvami, Sanatana Gosvami, Jiva Gosvami, Baladeva Vidyabhusana, and so on. These are authorities at the level of Guru and Sastra.
Of course we have to respect and listen to senior Vaisnava but we are not obliged to accept what they say as much as Guru, Sastra and real Sadhu.

To conclude I’d like to say something on another but related concept.
When we explain a philosophical concept we have the liberty to say things in different ways and even omit few things if we think it wouldn’t be good for our preaching.
But we don’t have this liberty with historical facts.
If we say “we must be born in a Gopi’s womb during Krishna’s pastimes on this earth”, this is an historical fact and it must be true. History can’t be manipulated. Either it happened or did not happen.
History is found in Sastra, it can’t be a projection of our philosophical convincement. You can’t fabricate stories and put in the mouth of a fictitious character of your book and passing it out as truth. If you call your character “Gurudeva” it doesn’t mean he is a Gurudeva. He is an invention of your fantasy.
I am not saying that this literary formula is wrong. Sri Bhaktivinoda Thakura used it, for example, in the Jaiva Dharma, but he is Sadhu, he is Bhaktivinoda Thakura. What his characters say is true because he wrote it.