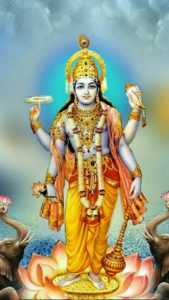 It’s a common conviction amongst scholars and even amongst certain branches of Vaisnavism that Krishna is an expansion of Narayana.

Srila Baladeva Vidyabhusana in his Siddhanta Ratnam rejects this point of view and states that Krishna is the origin of Narayana.

In the Maha-bharata (1.189.31 and 32) we find the following statement:
“Being requested by the demigods, Ksirodakasayi Visnu extracted a white and a black hair (kesau) which became Balarama and Krishna in order to remove the burden of the earth.”

One of the possibile translations of kesa is “hair”. In the Maha-bharata verse the noun kesa is expressed in the dual number (kesau) supposedly meaning “two hairs”. Therefore the translation of this verse is that Narayana manifested from His body two hairs and so Krishna and Balarama descended into this world.

However the translation of kesa as hair is wrong. In this context (samanvaya) kesa means “ray of light”, or “internal energy”.
Infact in the same Maha-bharata (12.328.1 up to 6) we find a description of the multicolored rays emanating from the Lord’s body seen by Narada Muni, and after in the same chapter number 328 Sri Krishna states the following:
amsavo ye prakasante
mama te kesa-samjnitah
sarvajna kesavam tasman
mam ahur muni sattamah
“The effulgent rays that emanate from me are called kesa. Therefore the best of sages who know everything call me Kesava.”

Not only the translation of “kesau” is wrong, but also to attribute the manifestation of this energy to Narayana, Sri Visnu, is incorrect.
Infact Narayana is also a name of Krishna.

narayano’kamayata prajah srijeyet
“The Supreme person, Lord Narayana, desired, let Me create offspring.”
Then after describing that the creation of the universe was manifested from Garbhodakasayi Visnu, it is stated:
brahmanyo devaki-putrah,
“He is the holy son of Devaki.”
(Narayana Atharvasira Upanisad)
Therefore the name Narayana in this context can only refer to Lord Krishna.

The correct translation of the verses 1.189.31 and 32 of the Maha-bharata is:
“Being requested by the demigods, in order to remove the burden of the earth and through His internal energy, the Lord descended into this world as the white bodied Balarama and the dark bodied Krishna.”

Balarama is Krishna’s vaibhava prakasa and Sri Krishna is the svayam-rupa, the Supreme Personalities of Godhead.

This is widely proven by the Sacred Scriptures. Just a few of the many possible quotes:

nārāyaṇas tvaṁ na hi sarva-dehinām
ātmāsy adhīśākhila-loka-sākṣī
nārāyaṇo ’ṅgaṁ nara-bhū-jalāyanāt
tac cāpi satyaṁ na tavaiva māyā
“Are You not the original Nārāyaṇa, O supreme controller, since You are the Soul of every embodied being and the eternal witness of all created realms? Indeed, Lord Nārāyaṇa is Your expansion, and He is called Nārāyaṇa because He is the generating source of the primeval water of the universe. He is real, not a product of Your illusory Māyā.”
(Srimad-Bhagavatam 10.14.14)

Om namo bhagavate vasudevaya.
“The supreme Lord is the son of Vasudeva.”
(Srimad-Bhagavatam 1.1.1)

We find that even Laksmidevi, who is Lord Narayana eternal companion desires to be with Krishna.
kasyānubhāvo ’sya na deva vidmahe
tavāṅghri-reṇu-sparaśādhikāraḥ
yad-vāñchayā śrīr lalanācarat tapo
vihāya kāmān su-ciraṁ dhṛta-vratā
O Lord, we do not know how the serpent Kāliya has attained this great opportunity of being touched by the dust of Your lotus feet. For this end, the goddess of fortune performed austerities for centuries, giving up all other desires and observing austere vows.
(Srimad-Bhagavatam 10.16.36)

If Narayana was the origin of Krishna, why would His consort want to be with Krishna?
The answer to this question is that she wants to associate with Krishna because only Him has all the qualities at the maximum quantity. In particular Krishna has four qualities that nobody has, which are:
1) the sweetness of the sound of His flute, which bewilders all moving and non-moving beings;
2) the sweetness of His form, which astonishes even Himself;
3) a transcendental ocean with waves full of pastimes which are astonishing to all and
4) display qualities such as unsurpassed mercy.

To conclude, the founder of our Sampradaya declares:
īśvaraḥ paramaḥ kṛṣṇaḥ
sac-cid-ānanda-vigrahaḥ
anādir ādir govindaḥ
sarva-kāraṇa-kāraṇam”
“Krsna who is known as Govinda is the Supreme Godhead. He has an eternal blissful spiritual body. He is the origin of all. He has no other origin and He is the prime cause of all causes.”
(Brahma Samhita 5.1)