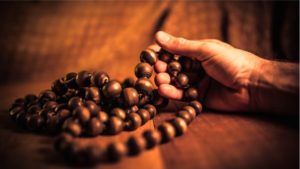 The word japa comes from the verbal root jap, which means to murmur.
Japa is therefore reciting mantras with a tone of voice sufficiently high so that the practitioner can hear himself but not to be heard by others.

Some says that the word japa is composed by the two syllables “ja” and “pa”, the first meaning “to destroy the cycle of birth and death”, and the syllable pa “to destroys all sins (papa)”. Therefore japa destroys all sins, stops the cycle of birth and death and liberates the soul from bondage.
We find this interpretation of the word japa in a book and the author attributes it to the Agni Purana.
Unfortunately he doesn’t specify where in the Agni Purana it is said so. Considering that the Agni Purana is about 16,000 verses (some say 15,400) it is giving us hard time to confirm.

Let’s see now what the Sanskrit dictionary says about the two syllables.

Ja:
in fine compositi or ‘at the end of a compound’ born or descended from, produced or caused by, born or produced in or at or upon, growing in, living at
prepared from, made of or with
birth
speed
enjoyment

Therefore, as you can see, in the two syllable by themselves there is nothing suggesting those philosophical concepts expressed before.
But we would not be at all surprised if such an interpretation is actually found in the Sastras, as attribuiting philosophical concepts to syllables and even vowels and consonants is quite common.
However these type of interpretations can be only given by the highest autorities, Guru Sastra Sadhu.

Maharaja, thank you for this meaningful explanation. 🙏🏽