Indira Ekadasi
from the Brahma-vaivarta Purana. 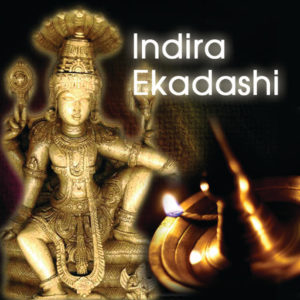 Yudhishthira Maharaj said,
“Oh Madhusudana, Oh killer of the Madhu demon, what is the name of the Ekadasi that occurs during the dark fortnight (krishna paksha) of the month of Ashwina (September-October)? Please describe its glories to me.”

The Supreme Personality of Godhead, Lord Sri Krishna then replied,
“This Holy day is called Indira Ekadasi. If a person fasts on this day, all his sins are eradicated and his forefathers who have fallen into hell are liberated. Oh best of kings, one who simply hears about this sacred Ekadasi achieves the great merit earned by performing a horse sacrifice.

“In the Satya-yuga there lived a king named Indrasena, who was so powerful that he destroyed all his enemies. His kingdom was called Mahishmati-puri. The glorious and highly religious King Indrasena took good care of his subjects, and therefore he was rich in gold, grains, sons, and grandsons. He was greatly devoted to Lord Sri Vishnu as well. He especially enjoyed chanting My name, calling out ‘Govinda! Govinda!’ In this way King Indrasena systematically dedicated himself to pure spiritual life and spent much time meditating on the Absolute Truth.

“One day, as King Indrasena happily and peacefully presided over his assembly, the perfect orator, Sri NArada Muni, was seen descending. White as a conch, shining like the moon, like a jasmine flower, like a lightening bolt, NArada Muni descending from the sky. He is decorated with matted locks of reddish hair. The king offered Devarishi NArada, the saint among the devas (demigods), great respect by greeting him with joined palms, inviting him into the palace, offering him a comfortable seat, washing his feet, and speaking sweat words of welcome. Then NArada Muni said to MahArAj Indrasena, ‘Oh king, are the seven limbs of your kingdom prospering?
The seven limbs of a king’s domain being; the king’s well being himself, his ministers, his treasury, his military forces, his allies, the braAhmaNas, the sacrifices performed in his kingdom, and the needs of the king’s subjects.
Is your mind absorbed in thinking of how you can properly perform your occupational duty? Are you becoming more and more devoted and dedicated to the service of the Supreme Lord, Sri Vishnu?

“The king replied, ‘By your kind grace, Oh greatest of sages, everything is quite well. Today, just by your presence all the sacrifices in my kingdom are successful ! Please show me mercy and explain the reason for your kind visit here.’

“Sri NArada, the sage among the devas, then said, ‘Oh lion among kings, listen to my astonishing words. When I descended from Brahmaloka to Yamaloka, Lord YamarAja praised me very graciously and offered me an excellent seat. As I glorified his truthfulness and wonderful service to the Supreme Lord, I noticed your father in YamarAja’s assembly. Though he had been very religious, because he broke an Ekadasi fast prematurely, he had to go to the Yamaloka. Your father gave me a message for you. He said, “In Mahishmati lives a king named Indrasena. Please tell him about my situation here – that because of my past sinful deeds I have somehow been forced to reside in YamarAja’s kingdom. Please give him this message from me: ‘Oh son, kindly observe the coming Indira Ekadasi and give much in charity so I can go upward to heaven.’ “
Philosophically we can understand that very living entity is an individual, and individually everyone has to practice Krishna consciousness to traverse back to home, back to Godhead. As stated in GaruDa Purana, someone who is suffering in hell cannot practice Krishna consciousness, because this requires some mental peace, which the reactionary tortures of hell make impossible. If a relative of a sinner suffering in hell gives some charity in the name of the sinner, he can leave hell and enter the heavenly planets. But if the sinner’s relative observes this Ekadasi fast for his suffering kinsman, the kinsman goes directly to the spiritual world, as stated in this narration based on Brahma-vaivarta Puranam.

“NArada continued, ‘Just to deliver this message, Oh king, have I come to you. You should help your father by observing the fast of Indira Ekadasi. By the merit you gain, your father will go to heaven.’

“King Indrasena asked, ‘Oh great NAradji, please be merciful and tell me specifically how to observe a fast on Indira Ekadasi, and also tell me during what month and on what day it occurs.’

“NArada Muni replied, ‘Oh king, please listen as I describe to you the full process of observing the Indira Ekadasi. This Ekadasi occurs during the dark fortnight of the month of Ashwina. On the Dashami tithi, the day before Ekadasi, rise early in the morning, take bath, and then do some service for God with full faith. At noon, bathe again in running water and then offer oblations to your forefathers with faith and devotion. Be sure not to eat more than once on this day and at night sleep on the floor.
“When you awaken on Ekadasi morning, cleanse your mouth and teeth thoroughly and then with deep devotion for the Lord take this sacred vow: ‘Today I shall fast completely and give up all kinds of sense enjoyment. Oh lotus-eyed Supreme Personality of Godhead, Oh infallible one, please give me shelter at Your lotus feet.” At noon, stand before the sacred form of the Sri Shaligram Shila and worship Him faithfully, following all the rules and regulations; then offer oblations of ghee into the sacred fire, and tarpana directed to help your forefathers. Next, feed qualified Brahmins (obviously non-grain prasadams) and offer them some charity according to your means. Now take the food pindas you offered to your forefathers, smell it, and then offer it to a cow. Next, worship Lord Hrishikesha with incense and flowers, and finally, remain awake all night near the Deity of Lord Sri Keshava.
“Early in the morning of the next day, DvAdasi tithi, worship Sri Hari with great devotion and invite Brahmin devotees to a sumptuous feast. Then feed you relatives, and finally take your meal in silence. Oh king, if you strictly observe a fast on Indira Ekadasi in this way, with controlled senses, your father will surely be elevated to the abode of lord Vishnu.’ After saying this, Devarishi NArada immediately disappeared from the scene to bless someone else with his presence.
“King Indrasena followed the great saint’s instructions perfectly, observing the fast in the association of his relatives and servants. As he broke his fast on the DvAdasi tithi, flowers fell from the sky. The merit that Indrasena maharaj earned by observing this fast released his father from the kingdom of YamarAja and caused him to attain a completely spiritual body. Indeed, Indrasena saw him rising to the abode of Lord Hari on the back of GaruDa Vahan. Indrasena himself was able to rule his kingdom without any obstacles, and in time when he handed over the kingdom to his son he also went to the spiritual realm of Vaikuntha.
“Oh Yudhishthira, these are the glories of the Indira Ekadasi, which occurs during the dark fortnight of the month of Ashwina. Whoever hears or reads this narration certainly enjoys life in this world, is freed of all reactions to his past sins, and at the time of death returns home, back to Godhead, where he lives eternally.”

Thus ends the narration of the glories of Ashwina-krishna Ekadasi, or Indira Ekadasi, taken from the Brahma-vaivarta Purana.