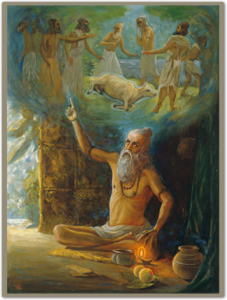 Hare Krishna Maharaja
My respects.
You say that the blessing of devotees is extremely important.
One devotee told me that she is praying to Srimati Radharani that I fall down. And another devotee also wants me to fall from devotional service.
Could it be that this will happen? Or is a reflection of their consciousness?

We find in our literature many episodes of one cursing someone else. The reasons that moved those personalities to launch a curse (sapam) against another one are many. Every circumstance is different from the others.

We go from a pure transcendental play, like Radharani cursing Sridama and viceversa, or Tulasi cursing Visnu to become a stone (salagrama)…
Or sages cursing kings to teach them to be well-behaved, like Agastya cursing Nahusa…
Or a brahmana cursing Sri Caitanya Mahaprabhu for not letting him enter into the kirtana house (see Caitanya Caritamrita Adi-lila Chapter 17).
There are so many instances and so many different reasons.

However I don’t know of any Gaudiya Vaisnava cursing another one and even less praying to Radharani at the effect that another devotee (or anyone) falls down.

Just like the main quality of a fire is heat, the main constitutional nature of a Gaudiya Vaisnava is that he wants everybody (with no exception) to go back to Krishna. It is called karuna, mercy, the first and foremost quality of a Vaisnava. A Gaudiya Vaisnava dedicates his entire life to this mission and he does nothing else.
uchalila prema-vanyā caudike veḍāya
strī, vṛddha, bālaka, yuvā, sabāre ḍubāya
The flood of love of Godhead swelled in all directions, and thus young men, old men, women and children were all immersed in that inundation.
(Caitanya Caritamrita Adilila 7.23)

That curse it is a bufoonery and will have no effect because Srimati Radharani is not our order carrier to satisfy our anger.

Having said that, and since we are talking about sapam (curse), let’s say something more.

The capacity of cursing is one of the yoga siddhis, a power that we can acquire through severe austerities. As we find in the Maha-bharata, the young Sringi, son of ascetic Samika, had the power to curse Maharaja Pariksit because he performed many austerities and because of this what he said was bound to happen.
If someone has made no austerities as enjoined by the Veda, his curse will have no effect. It’s like, if you have no money you cannot buy a house.

But if still you are concerned, read the curse of the Brahmana to Caitanya Mahaprabhu and you’ll be free from any worries:

So if the person who cursed you is a powerful brahmana who made a lot of austerities, studies, sacrifices etc. (which I doubt), read that and you’ll be safe.

It is useful to take note of how a Vaisnava reacts when cursed.
śrī-śuka uvāca
pratijagrāha tad bāḍhaṁ
nāradaḥ sādhu-sammataḥ
etāvān sādhu-vādo hi
titikṣeteśvaraḥ svayam
Śrī Śukadeva Gosvāmī continued: My dear King, since Nārada Muni is an approved saintly person, when cursed by Prajāpati Dakṣa he replied, “tad bāḍham: Yes, what you have said is good. I accept this curse.” He could have cursed Prajāpati Dakṣa in return, but because he is a tolerant and merciful sādhu, he took no action.
(Srimad-Bhagavatam 6.5.44)

Srila Prabhupada’s purport to this verse is noteworthy. Please read it.

In conclusion those foolish curses will have no effect, but you have got a chance to meditate how a Vaisnava reacts to difficult circumstances.