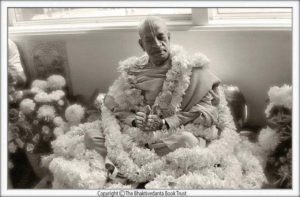 Probably the devotee was refering to the following verse:
acaryam mam vijaniyan
navamanyeta karhicit
na martya-buddhyasuyeta
sarva-deva-mayo guruh
One should know the acarya as Myself and never disrespect him in any way. One should not envy him, thinking him an ordinary man, for he is the representative of all the demigods.
(Srimad-Bhagavatam 11.17.27)

Acaryam mam vijaniyan. The meaning of this phrase is that the Guru is a most loved servant of Krishna because he is trying to lead the fallen souls back to Godhead. Wanting everybody back, Krishna gives some of His sakti even to non pure devotee to carry out His mission. More advanced is the devotee, more of Krishna’s mercy will be visible and effective.
But the Guru is not God. Since the spiritual master is very much loved, Krishna says, he is like Me. It is the expression of someone in love. Just like people says, “my son is me”, “my friend is me”, “my beloved is me”.

Na avamanyeta karhicit, one should never disrespect the spiritual master.
Na martya-buddhya, by thinking that he is an ordinary man. Martya-loka is this world, the world of death.

So if the Guru is not an ordinary man, what is he?
If you would ask any very advanced devotee he will answer, “I am only a humble servant of my spiritual master”.
The peculiarity of this answer is that he doesn’t think, “now I’ll say to my disciple I am very fallen, he will think to the contrary and I’ll be glorified not only because I am a Guru but also because I am humble”.
No, he actually thinks to be “a humble servant of his spiritual master”.
As he advances in spiritual life, a devotee will loose all interest in being recognized by others, he will gradually loose contact with the external world and will live internally in the spiritual world. This interior state of being will be characterized by gentleness and humbleness.

But your question is not how a Guru sees himself, but how the disciples should see him.

He should see him as the Srimad-Bhagavatam verse says. The disciple should serve and learn with the idea that he is very lucky to have been in contact with such a mahatma (great personality).

Although the Guru thinks of himself as lowly, he will respect the service he received and act as a Guru should.
Any bonafide spiritual master accepted this service because his spiritual master asked him to do it. So he’ll carry on his preaching as a duty, taking the mood of a Guru, again, out of duty. When he receives honors he will accept them.
He may not like it, but he must accept them.

The reason is that there is nothing worse in a preacher’s life than to deprive a sincere devotee of his opportunity to serve a Guru. If the Guru doesn’t act as a Guru, the disciple will never learn to be a disciple. So he may have a spiritual name, received upanayana or a tridanda but he never really was a disciple, he was a bad disciple.

So a bad disciple will be a bad guru, and in this way the parampara will be interrupted, which is a disastrous outcoming.

So a Guru does not, out of shyness, fail to give opportunities of service and learning to the disciple, and the disciple should go searching for any way to give personal service to the spiritual master.

Therefore the disciple should see his spiritual master as the representative of the Guru Parampara and of Krishna, will give him all honors, will diligently study the Vedas under him and offer service.
And how? Samit panih. With sami wood in his hands. This is a Vedic image to suggest service and humbleness.
Yasyaprasadan na gatih kuto ’pi, there is no other way.