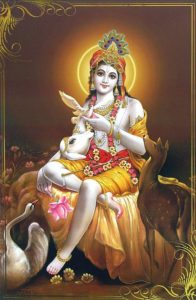 On this day Lord Sri Krishna became a qualified cowherd. Before this day, he was a keeper of the calves.

The Killing of Dhenukasura

“Thus Sri Krishna, along with His elder brother Balarama, passed the childhood age known as kaumara and stepped into the age of pauganda, from the sixth year up to the tenth. At that time, all the cowherd men conferred and agreed to give those boys who had passed their fifth year charge of the cows in the pasturing ground. Given charge of the cows, Krishna and Balarama traversed Vrindavana, purifying the land with Their lotus footprints.”

Other Gopastami pastimes in our Archive