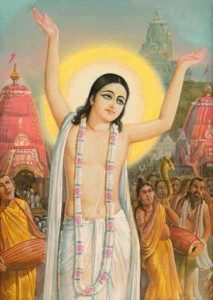 Sri Gadadhar was the constant companion of Mahaprabhu from the time of their childhood.
His father’s name was Sri Madhva Misra and his mother’s name Sri Ratnavati-devi.
They lived very near the house of Sri Jagannatha Misra in Mayapura.
Ratnavati-devi thought of Saci-devi as her own sister, and always used to visit her.

During their childhood, Sri Gaura Hari and Gadadhara would play together, sometimes at Mahaprabhu’s house and sometimes at Gadadhara’s house.
They both studied together at the same school.
Gadadhara was a few years younger then Nimai. Nimai couldn’t remain without Gadadhara even for a moment and Gadadhara likewise couldn’t stand to be separated from Nimai.

Gadadhara is Radharani
In the Gaura-ganoddesa-dipika, it is described that that person who in Vraja was the daughter of Sri Vrsabhanu Raja, namely Srimati Radharani, is now celebrated as Sri Gadadhara Pandita.

Sri Vasudeva Ghosa Thakura has also written:
Agam agocar gora akhil brahma-par, veda upar, najane pasandi mati bhora Nitya-nityananda Caitanya Govinda Pandit Gadadhar Radhe Caitanya yugala-rupa kebol raser kup avatar sadsiva sadhe Antare nave-ghana bahire gaura tanu yugalrupa parkase Kahe Vasudeva Ghose yugal bhajan base janame janame rahu asa
“Lord Gaurasundara, who is beyond the perview of the scriptures, beyond the entire Brahman, and above even the Vedas, can never be known by the atheists whose intelligence is dull. Lord Nityananda is His eternal self. Lord Caitanya is Lord Govinda Himself and Pandita Gadadhara is none other than Sri Radha. The divine couple, who are present in Sri Caitanya, are a well of rasa. Advaita Acarya (Sadasiva) has prayed for His descent.
Within He is blackish but of a golden hue without, the manifestation of the divine couple. Thus Vasudeva Ghosa sings of the beauty of this divine couple – Sri Gaura-Gadadhara – in whose worship he has been completely subjugated. He prays that he will desire to serve them birth after birth.”

In Sri Caitanya-caritamrta we likewise find:
Panditer bhav mudre kahan na jay gadadhar pran nath nam hoila jay panditer krpa prasad lehan na jay gadai gauranga kari sarvaloke gay
“The emotions and expressions of Pandita Gadadhara are not possible to describe. Another name of Lord Gauranga is the ‘Lord of the life of Gadadhara.’ Who can understand what mercy has been bestowed upon him? Their glories are sung by everyone as Gadai-Gauranga.”

More on childhood
Gadadhara was from his very childhood very serene, patient, calm, quiet, fond of solitude and very renounced.
Nimai Pandit during the time of His precocious youth would ask his fellow students meaningless, fallacious questions in logic.
Gadadhara however, was not especially fond of this pastime, and therefore he sometimes used to remain at some distance from Nimai.
But Nimai wouldn’t allow him to get away.
He would tell him – “Gadadhara! In a very short time I’ll become such a Vaisnava that Lord Brahma and Lord Siva themselves will come to My door.”

However, when Gadadhara saw that Pundarika Vidyanidhi dressed and acted like a wealthy materialist, he lost whatever reverence he had previously felt even before speaking with him.
Gadahara thought to himself,
“How can a Vaisnava look and act as if he was so addicted to sense enjoyment?”

However, Mukunda knew the real character of Pundarika Vidyanidhi, and he could also sense the doubts in the mind of Gadadhara Pandita.
Thus he recited some slokas from the Srimad Bhagavatam in a very sweet voice.
When Pundarika Vidyanidhi heard his beautiful recitation of these slokas, in a fit of ecstasy he began to cry while calling, “Krsna, Krsna”, and finally fainted dead away on the floor. [Caitanya Bhagavata. Madhylila 7.78-79].

Gadadhara now felt very remorseful in his mind. He thought to himself,
“Because I have ignorantly considered this highly advanced soul to be an ordinary materialist, what an offense I have committed!
In order that I might be saved from the reaction of this offense, I think the only solution is to accept initiation from him.”

Gadadhara Pandita submitted his proposal to Mukunda, who presented it to Pundarika Vidyanidhi with a full account of the pandita’s high qualifications.
“Hearing this proposal, Pundarika became very happy.
‘Providence has bestowed upon me a great jewel; certainly I will accept him. You shouldn’t have any doubt about that. It is the result of many lifetimes of good fortune that one gets a disciple like this.’” [Chaitanya Bhagavata. Madhyalila 7.117-118].
On an auspicious day, Sri Gadadhara Pandita received the divine mantra from Pundarika Vidyanidhi.

Caitanya comes back from Gaya
Sri Caitanya Mahaprabhu, upon going to Gaya Dham, first began to manifest Krsna-prema.
There he enacted the pastime of accepting the shelter of Sri Isvara Puri.

After returning to His house He began to exhibit a new life.
Day and night He floated in the ocean of love of Krsna.
Gadadhara, upon seeing the Lord showering of tears in love for Krsna, also began to cry in ecstatic love.
From this time, Gadadhara Pandita was always at Mahaprabhu’s side.

One day Sri Gadadhara brought some pan to Sri Gauranga, Who, in an exuberance of emotion asked him,
“Gadadhara! Where is that beautiful blackish boy Who is dressed in yellow garments?”
After asking this, He began to shed tears.
Gadadhara couldn’t immediately think of what to say.
He finally respectfully suggested,
“He is in your heart.”
Hearing this, Mahaprabhu began to tear at his chest with his nails, but Gadadhara quickly grabbed his hands.
Prabhu said to him,
“Gadadhara! Let go of My hands. I cannot remain a moment more not seeing Krsna.”
Gadadhara replied, “Just try to be a little patient and calm Yourself. Krsna will come any minute now.”
Hearing this, Mahaprabhu became somewhat composed.

Sacimata heard all this from a distance and then came running there.
Being very pleased with Gadadhara, she declared,
“Though He is just a boy, He is very intelligent. I am frightened to go before my son when He is in these moods. But Gadadhara has very cleverly pacified him.”

“Sacimata told Gadadhara,
‘Gadadhara! You must please remain with Nimai always. If you stay with Him then I won’t have to worry.”

For more on Sri Gadadhara Pandita on www.isvara.org