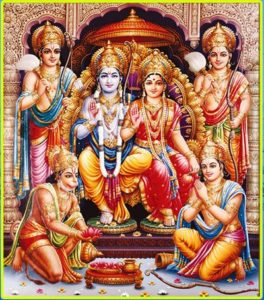 Hare Krsna.
Maharaj,
Accept my most humble and respectful obediences, all glories to Srila Prabhupad.
In my Ramayana reading, these questions came to me:
There are several more, which would be sent later …

How many years has it been since Lord Rama?
If the Lord Ramacandra told in the Valmiki Ramayana appeared during the Treta Yuga of the present Maha-yuga, then the calculation would be:
5,122 years passed from this Kali-Yuga
864,000 from the Dvapara Yuga
The Treta Yuga lasted 1,296,000 years, the exact date when Ramacandra appeared is unknown.
So he can have appeared in a period going from 869,122 human years ago to 2,165,122 years ago.

However I have some elements that would suggest that Lord Ramandra appeared during the 24th Maha-yuga of the present Manvantara, Vaivasvata. If this were so, to the 2,165,122 number should be added the time of 3 Maha-yuga and then other Kali, Treta and Dvapara Yugas of the 24th Maha-yuga. The number is over 16 millions years ago.

I understand that these calculations can be difficult to digest for someone, but this was your question and can’t there be another answer.

Who is Valmiki’s mother?
There is no mention of Valmiki mother’s name.

Who is the sage Rishyasringa (there is no mention of his mother’s name).
Rishyasringa was the son of sage Vibhandaka and a very powerful Rishi himself. It is a long story and part of it is told in the Aranya Parva of the Maha-bharata. I will tell it some another time.
King Dasaratha chose Rishyasringa to celebrate the sacrifice called Putrakamesti in order to have sons, and as a result Rama and his brothers appeared on Earth. This nice story is told in the Bala Kanda of the Ramayana (Chapters 14-16).

What is an Ashuamedha Yajna?
It is a vedic sacrifice that gives the kings the solution to their sins.
In a few words, they put some sign on the head of a horse (asva) and let it go wherever it wanted. If a king stopped him it meant that he did not want to accept his superiority and the king would challenge him in battle.
If he defeated all the kings he would become emperor.

What was actually the reason Lord Ramacandra came down?
The same reason as Krishna.
Partitranaya sadhunam vinasaya ca duskritam ecc. To give pleasure to the devotees, to chastise demons and to reestablish the principles of spiritual life.

What was Jambavan’s pastime like? I heard that one time Brahma was yawning, and he was born, the king of bears
In the Bala Kanda of the Ramayana we find the following:
“Brahma sat for a long time thinking about the creation of monkeys. Then he wanted to yawn, for which he opened the mouth and instantly Jambavan came out from inside Brahma through the open mouth.
‘I have already created Jambavan the noble bear, who jumped out of any mouth when I yawned’
Brahma said.”
(Valmiki Ramayana, Bala Kanda, 17.6).
Sometimes Jambavan is called a Kapi, a monkey, but most of the time is defined as a Riksa, a bear.

What is the deva of the rains? Parjanya or Lord Indra?
Parjanya is one of Indra’s names. Not to be confused with Krishna’s grandfather.

Who is Pulastya? Ravana is said to be Pulatya’s grandson and Pulatya is one of Brahma’s 9 mental children!
Pulastya is one of the sons of Brahma and a Prajapati. He was born from Brahma’s ear. We find the story in the Maha-bharata.
By his wife Havirbhu Pulasya had a son named Visrava, by whom came the first ancestry of Raksasas.
But Visrava has four wives, and one of them was Kaikasi, who was the mother of 3 sons, Ravana, Kumbhakarna and Vibhisana, and one daughter, Surpanakha.

What are Brahma’s mental children?
The Maha-bharata (Adi Parva, 65-10) mention six sons born of his mind, and are:
Marici, Angiras, Atri, Pulastya, Pulaha, and Kratu.