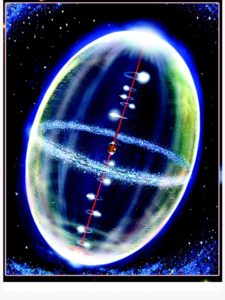 I humbly request participants in this never ending debate and everyone else interested in its outcome to invest a few dollars and a significant amount of time into reading this book : Mystic Universe: An Introduction to Vedic Cosmology. If author Ashish Dalela (Rsiraja das) is reading this, I’d also like to request him to offer it for free to devotees because the subject matter is rather important. This book is a re-reading of Srimad Bhagavatam that offers a radically different approach to the whole issue. Maybe a few chapters from the first half dealing with Sankhya and overall model of the universe if not the whole detailed description that follows.

Consider this – dimensions and directions in our traditional Vedic model with Brahma-loka at the top and hellish planets at the bottom are not physical. The three dimensions in the universe are three gunas instead and since we can’t directly perceive the gunas it’s impossible for us to ever “see” the universe as described in shastra. This is a big challenge to designers of our upcoming Vedic planetarium – our model of the universe is not an alternative to a scientific one, It’s not that the scientists misinterpret their data and we offer a better version but that when Bhagavatam says “universe” it means an entirely different thing.

Another important point to digest is that Vedic universe can be modeled as a tree, just like Krishna says in Bhagavad-gita. This mental image is similar to the evolutionary tree which helps us understand alleged relationships between species but doesn’t exist in real life. Every phenomenon in the universe is a location on this tree – a branch, a twig, a leaf etc. It has an origin that connects it to the root and it also serves as an origin to subsequent phenomena.

Our physical perception of the universe is one such phenomenon and it originates in interaction between our senses and sense objects, These “observations” and out interpretation of them is specific to our location within Vedic cosmos AND time, which gradually reveals or hides them from us. Eventually time will reveal ALL the observations and subsequent theoretical models but we, obviously, will not live long enough to see them. We have documented this process over the past two thousand years and we can see how scientific model “evolves” in real time now with constant reinterpretation of things like black holes etc. What is important to understand that there’s no such thing as objective, physical universe at all.

Demigods, for example, are located on a different, higher branch of the tree that ends with different kind of leaves, so to speak. They do not have gross senses similar to ours and gross sensual objects are not manifested to them either. For them our “physical” universe does not exist at all. They might have a very good idea how it is manifested for us but they do not perceive it directly themselves. One might think of a popular saying in this regard: “Great Minds Discuss Ideas; Average Minds Discuss Events; Small Minds Discuss People”. Demigods do not need gross senses to derive sense gratification, they are happy with what to us would look only as an idea of eating, for example. Conversely, demoniac beings derive their pleasure from ever more sophisticated manifestations of gross matter. Pretty much like gourmets and various connoisseurs can sense subtle but important differences in what feels the same to ordinary people. For asuras our physical model of the universe would appear as a step in the right direction but grossly inadequate, like instant coffee to coffee lovers. This could make us rethink what is “better” prasadam, btw.

Therefore it’s pointless to argue whether the Earth is flat or round. It’s round NOW to those perceiving it with gross senses in our part of the Vedic universe and for them it will become flat again in due course of time. Or they might create a new model where it is a multidimensional cube that appears as a globe when projected into three dimensional space, who knows. The Earth is always flat in a three-guna-dimensional universe, however. More or less flat, that is – because we have descriptions of pretty high mountains dividing various varshas, for example. Roughly speaking, traveling across these mountains in Vedic sense means significantly increasing one’s mode of goodness to go over them and them lowering it back again to the level of the next varsha. The book compares such crossing to an entrance exam that is expected to be harder than subsequent regular daily studies. Traveling West means an increase in tams and traveling South means an increase in rajas, if I remember correctly.

Normally, however, no one travels like that and conditioned beings simply wait until another region of their particular part of the universe is manifested to them along with all the possibilities for sense enjoyment it includes. In the beginning of the Second Canto of Srimad Bhagavatam Srila Sukadeva Gosvami describes the universe in brief and incidentally reveals how such travel could be possible – meditate, withdraw senses organs from sense objects, dissolve senses into the mind, and eventually exit your body through the top of your head. You can’t take gross senses – arms, legs etc, to another region of the universe not manifested for you according to time and karma, they don’t belong there, they are a feature of your part of the universe and nowhere else. Maybe one can find exceptions but this process is familiar for any generic yoga practice described in our books – the yogi must disconnect his consciousness from his sense organs first.

I must admit that I haven’t finished the book myself, for what I see as objective reasons, but I intend to do so as soon as possible. It’s not an easy read and the book is not without its faults but it does offer what looks like a genuinely Vedic reading of Srimad Bhagavatam, with Vedic explanations for things like gravity etc.

Perhaps this brief overview will not satisfy the warring parties but it still offers a different perspective that is able to reconcile and explain emergence of both opposing sides and, therefore, it looks potentially superior, even if in need of further elaboration.