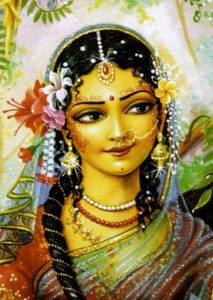 There are two gopis who are Krishna’s dearmost: Radharani and Candravali. Amongst the two, Srimati Radharani stands supreme.

In the past we have spoken about some differences between the two. Today we’ll say something more.

Srimati Radharani controls Krishna. For this She is known svadina-bhartrika.
This mood can be divided into two types:

Candravali has maitri as the prominent mood, while Radharani has the mood of sakhya.

The life mission of a Gaudiya Vaisnava is to inspire the fallen souls to serve Srimati Radharani.
If one reads attentively Srila Prabhupada’s books he will find such a mood.