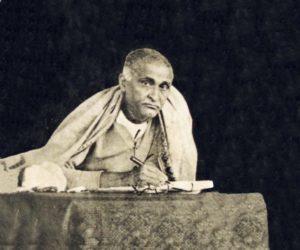 “The world is in no need of any reformer. The world has a very competent person for guiding its minutest happenings. The person who finds that there is scope for reform of the world, himself stands in need of reform. The world goes on it its own perfect way. No person can deflect it by the breadth of a hair from the course chalked out for it by providence…
What is necessary is to change our outlook to this very world…
The scriptures declare that it is only necessary to listen with an open mind to the name of Krishna from the lips of a bona fide devotee.

As soon as Krishna enters the listening ear, He clears up the vision of the listener so that he no longer has any ambition of ever acting the part of a reformer of any other person, because he finds that nobody is left without the very highest guidance.

It is therefore his own reform by the grace of God, whose supreme necessity and nature he is increasingly able to realize by the eternally continuing mercy of the Supreme Lord.”

from an article in Sajjana Toshani in the May 1932
issue, No.11 The article is called “Sri Chaitanya in South India”

First of all we should verify if this article was written by Srila Bhaktisiddhanta Sarasvati Maharaja in english and not in bengali.

If he wrote it in bengali, then we should verify who the translator was and if the translation is correct.
It is not enough to know a language to be able to translate this kind of articles, especially by such a ingenious philosopher as His Divine Grace.

For one, I would like to know what the word “providence” means.
Providence is a word much used in christian culture that doesn’t mean anything in our philosophy.
Everything happens either as a result of our past actions or by the special will of the Supreme Lord on His devotees.
There is no such a thing as “providence” in the common meaning. Providence is a way to throwing the responsibility on God of things we did and for which we are taking the just reactions. This is not our philosophy.

Then we should read the whole article to understand the historical context. You are sending me only an extract. What reformer was Srila Sarasvati talking about?

For instance we know that when Srila Prabhupada met Bhaktisiddhanta Sarasvati Gosvami Maharaja he told him that he liked Gandhi’s political movement, but Srila Bhaktisiddhanta was not at all impressed by Gandhi. He said something similar to what he is writing in this article, that we do not need reformers (political, religious, philosophical). Even in our lifetime we see people and even devotees who, not being satisfied enough with simply chanting Hare Krishna, go around inventing new concepts.
We do not need new things.
We need Krishna consciousness.

Then Srila Bhaktisiddhanta goes on describing the process of sravanam kirtanan visnoh smaranam that we find in Srimad-Bhagavatam (7.5.23-24), which means, you first hear from the lips of a pure devotee the Holy Name (sravanam), then you repeat it (kirtanam) and then you’ll remember Krishna (visnoh smaranam). This rememberance is Krishna consciousness.

Let’s continue with the example we were using before. If Gandhi had heard the holy name from the lips of a pure devotee he would not have desired to have been the reformer of anybody, because Krishna do not abandon His sons (the jivas) in this material world. He is present into the heart of everybody (as Paramatma) and outside as the bona fide spiritual master.

Certainly the “reformer” that Srila Bhaktisiddhanta is saying that we do not need is not the pure devotee.
In fact he stated only one line above that “the scriptures declare that it is only necessary to listen with an open mind to the name of Krishna from the lips of a bona fide devotee.”

So if this pure devotee does not preach, how the people would be able to listen from him?

If we do not need preachers and Krishna does it all from the heart, why Srila Bhaktisiddhanta sent Srila Prabhupada in the West? Why he tried to send other disciples in Great Britain? Why did he write so much? Why Lord Caitanya has initiated the sankirtana movement? Why Vyasadeva came and wrote so many books?
I could go on and on ad infinitum.

In conclusion the highest work one can do in life is preaching, namely spreading this wonderful philosophy of Krishna consciousness. There is no more noble activity.
prthivite ache yata nagaradi grama
sarvatra pracara haibe mora nama
“In every town and village, the chanting of My name will be heard.”
(Caitanya-bhagavata, Antya-lila 4.126)