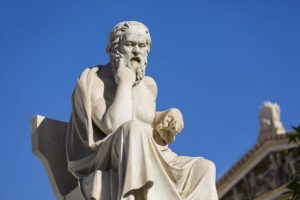 We find Socrate’s opinion on democracy in the Republic, from Plato. In book 6, Socrates speaks to Adeimantus and equalizes society to a ship. What would you prefer, says Socrates, that the ship be guided by an educated and expert captain or anyone just because may be liked by people?

He states that voting is a skill, not a random intuition. As any skill, one must be educated in the science of sociology to achieve it.

Socrates also said that democracy without education becomes demagogy, a sneaky and dishonest way to achieve political power. A demagogue exploits people’s ignorance and promises anything to cheat them to gain power. At the end an unqualified person will be ruling a country and people will get nothing.

Socrates also states that democracy is something similar to a caste system, where unqualified persons will have same rights without having the same qualifications. Just because one is born in a country, he will vote and his vote will have the same value of a highly educated man.

Srila Prabhupada also expressed doubts on the validity of a general election playing on the name “democracy” (demon – crazy).

The Vedic system was that of a “brahminical monarchy”. The King will have the most erudite Brahmanas, highly expert on the Vedas, to guide him. The highest authority was not the personal will of the King but the Scriptures and the saints. The Brahmanas had a lot of power, as the story of King Vena teaches us.

However if there are no qualified Ksatriyas (Kings) and qualified Brahmanas (Vedic scholars) this system can’t work and any society, big or small, will not flourish.