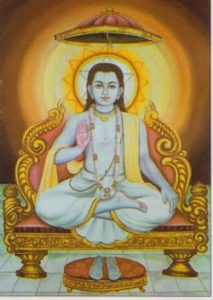 The following verse from the Mundaka Upanisad (3.1.9) that we find in Srila Prabhupada’s Bhagavad-gita (2.17, purport) gives us a clear definition:
eṣo ’ṇur ātmā cetasā veditavyo
yasmin prāṇaḥ pañcadhā saṁviveśa
prāṇaiś cittaṁ sarvam otaṁ prajānāṁ
yasmin viśuddhe vibhavaty eṣa ātmā
“The soul is atomic in size and can be perceived by perfect intelligence.
This atomic soul is floating in the five kinds of air (prāṇa, apāna, vyāna, samāna and udāna),
is situated within the heart, and spreads its influence all over the body of the embodied living entities. When the soul is purified from the contamination of the five kinds of material air, its spiritual influence is exhibited.”

So consciousness is a capacity of the spiritual soul to perceive what’s happening in our mortal frame since it spreads its influence all over that body.
If we touch our finger we feel the touch because the soul is spreading its influence everywhere his body, including the finger. If we cut the finger that perception is not there anymore because the influense of the jiva is limited to his body and not outside.

Therefore the meaning of the expression “Krishna consciousness” is that we’ll be able to perceive Krishna’s presence everywhere, even in our heart where our loving propensities are.