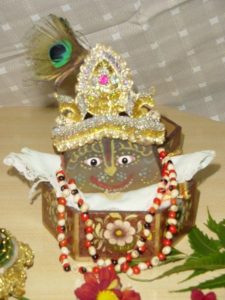 …
Can I pick up a stone from Govardhana and worship Him at home?
…

In the Sastra there are many other quotes at this effect.

However:
Years ago I went to the Radharaman temple in Vrindavana and spoke with the main pujari and asked what is the difference between worship of Deities in human form and worship of the Silas.
He said that Deities in human form are not installed until we perform the necessary ceremony. Before that we do not commit serious offences. But Salagram, Govardhana or other Silas do not need installation ceremonies and therefore we have to worship Them with the proper standard from day one.

Moreove there is a letter sent to Palika Devi Dasi in which Srila Prabhupada orders the devotees to return a Govardhana Sila as soon as possible. I do not know the reason that brought Srila Prabhupada to give such a perentorious order.

I also heard (unable to quote) that Silas should be given and not picked up by themselves.
We find the story in Caitanya Caritamrita Antya-lila (6 chapter) of how Sankarananda Sarasvati brought a sila from Govardhana and gave it to Sri Caitanya Mahaprabhu. Pleased with his devotion, later He gave that stone to Raghunatha dasa Gosvami.

Ultimately I would say that devotees should worship Govardhana Sila only if they are very serious about devotion.