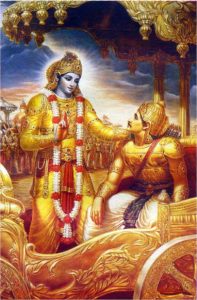 Are Arjuna and Kunti Devi in Krishna Loka ?

“To answer your second question, you should know that Arjuna and Kunti Devi are not in Krishna Loka. They are eternally associated with Krishna only in the material world. Just like Krishna is always in the spiritual world, so similarly He is always in the material world and His Pastimes are going on there also. In the material world, Krishna also has eternal associates, such as Arjuna and Kunti Devi. There is a difference between the body and soul of Arjuna and Kunti Devi. But although Arjuna is with Krishna in innumerable different material universes at one time, still there is only one spirit soul who is Arjuna. This spirit soul expands into many different bodies and thus you can understand that there are also incarnations of devotees as well as incarnations of Krishna. This is the power of the spirit soul, that it is unlimited. Such conception cannot be understood while one is still in the conditioned state”
Srila Prabhupada’s Letter to: Saradia — Los Angeles 12 December, 1968.

Hare Krishna Maharaj! Accept my most humble and respectful obediences, all glories to Srila Prabhupad.
Can a living entity expand?
Is there an amount to expand the living entity?

Just few days ago I was reading the Siddhanta Ratnam, a book by Srila Baladeva Vidyabhusana, in which I found the same thing that Srila Prabhupada says, that the liberated jivas can expand to participate to the Lord’s pastimes.

But it’s not a new concept, as it’s found often in the Scriptures that the jivas expand and even mix together to form new personalities.

Just one example from the Gaura-ganoddesa-dipika, by Srila Kavi Karnapura, book that you find in my bookstore translated and explained. (www.isvara.org)

The powers of the Supreme Lord are infinite, there is nothing that cannot or couldn’t be or happen.