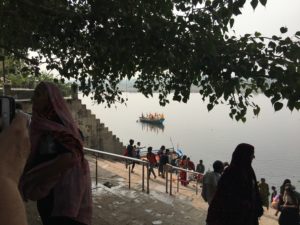 At Brahmanda-Ghata, on the bank of the Yamuna River Krishna ate dirt.

When forced by mother Yasoda to open His mouth, He revealed to her the entire cosmic manifestation (Brahmanda).

Therefore this place is called Brahmanda-Ghata.

This is a peaceful place and is a good place to bath in the Yamuna. You can get mud cakes (little round mud balls) here which symbolize the  mud eaten by Krishna.

Another day, when Krishna and Balarama were playing with Their friends, all the boys joined Balarama and told mother Yasoda that Krishna had eaten clay. On hearing this, mother Yasoda caught hold of Krishna’s hand and said.

‘My dear Krishna, why have You eaten earth in a solitary place? Just see, all Your friends including Balarama are complaining about  You.’

Being afraid of His mother Krishna replied.

‘My dear mother, all these boys, including My elder brother Balarama, are speaking lies against Me. I have never eaten clay. My elder brother  Balarama while playing with Me today, became angry, and therefore He has joined with other boys to complain against Me. They have all combined together to complain so you will be angry and  chastise Me. If you think they are truthful, then you can look within My mouth to see whether 1 have taken clay or not.

‘All right, if You have actually not taken any clay, then just  open Your mouth. I shall see.”

“When the Supreme Personality of Godhead Krishna was so ordered by His mother.

He immediately opened His mouth just like an ordinary boy.

Then mother Yasoda saw within that mouth the  complete opulence of creation. She saw the entire outer space in all directions, mountains, islands, oceans, seas, planets, air, fire, moon and stars. Along with the moon and the stars she also  saw the entire elements, water, sky, the extensive ethernal existence along with the total ego and the products of the senses and the controller of the senses, all the demigods, the objects of the  senses like sound, smell, etc., and the three qualities of material nature. She also could perceive that within His mouth were all living entities, eternal time, material nature, spiritual nature, activity,  consciousness and different forms of the whole creation. Yasoda could find within the mouth of her child everything necessary for cosmic manifestation. She also saw within His mouth, herself  taking Krishna on her lap and having Him sucking her breast.”

In our Archive you find more information, pictures, video, audio and articles in other languages.