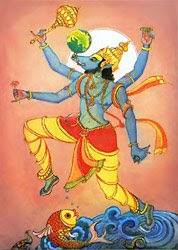 Varahadeva is a cyclic incarnation. We know that sometimes he comes as Sveta Varaha (the white Boar) and some other time as Rakta Varaha (the red Boar).

Sveta Varaha appears the first days of Brahma’s 50 years of life (so twice), He lifts the earth but doesn’t kill demons. He appears during Padma Kalpa, also called Varaha kalpa. It is called Padma Kalpa because Brahma is still on the lotus flower of Garbhodakasayi Visnu.

The Rakta Varaha appears after the other Varaha, saves the earth and kills Hiranyaksa.
There is also a mention of a Varaha appearing during Svayambhuva Manvantara (which would be the Varaha that we know) and another one during Raivata Manvantara.
Srila Prabhupada says:
“Hiranyaksa had to fight with Varahadeva, and that same Varahadeva is mentioned in regard to the Raivata millennium. The fighting, however, took place during the reign of the first Manu, Svayambhuva. Therefore according to some authorities there are two Varahas.
According to others, however, Varaha appeared during the regime of Svayambhuva Manu and stayed in the water until that of Raivata Manu. Some may doubt that this could be possible, but the answer is that everything is possible. If one could count the atoms within the universe, one could count the qualities of Lord Visnu. But the atoms of the universe are impossible for anyone to count, and similarly no one can count the transcendental qualities of the Lord.”
(Srimad-Bhagavatam 8.5.6)

Svayambhuva is the first Manu and Raivata is the 5th. That means Varaha should have stayed in the waters for millions of years. But, as Srila Prabhupada remarks, if that was the case wouldn’t be surprising. There is nothing impossible for the Lord.

Sastras describe the physical form of Varaha as a gigantic Boar. If He was half boar and half human we would have found this description, like in the case of Narasimha, who is described half lion (simha) and half man (nara). But Lord Visnu is not constricted into any form and at times He can manifest variations to the original form.