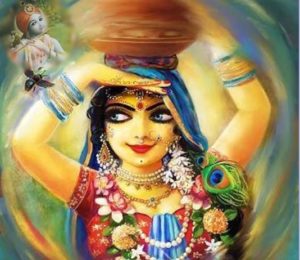 I am publishing this short paragraph from the Jaiva Dharma, a book written by Srila Bhaktivinoda Thakura, just to show how deep and wonderful is the science of rasa, the psycology of the liberated entities living in the spiritual world.
I am aware that some of you will not understand much of what you read below, but at least you can realize how exiting is to study Krishna consciousness.

“There are four ingredients of rasa: vibhava, anubhava, sattvika and vyabhicari. Yesterday I explained vibhava-tattva, and today I shall first explain anubhava. Listen carefully.

“Vibhava refers to the personalities who are the cause of rati arising. Now, anubhava refers to those visible symptoms that cause rati to become evident, and by which the bhavas in the heart are realized. In other words, anubhava consists of activities such as sidelong glances and hairs of the body standing on end, which are manifest as external bodily transformations, but which actually reveal the bhavas of the heart. These internal bhavas are revealed by the following outward expressions of agitation:
dancing (nrtya),
rolling on the ground (vilunthana),
singing (gita),
crying out loudly (krosana),
stretching the body and writhing (tanu-motana),
roaring (hunkara),
yawning (jrmbhana),
sighing and breathing deeply (dirgha-svasa),
indifference to public opinion (lokanapeksita),
salivating (lalasrava),
laughing loudly (atta-hasa),
dizziness (ghurna), and
hiccupping (hikka).”

Vrajanatha: How can these external transformations nourish the tasting of the rasa of the internal sthayibhava?
I also have another question. At the time of tasting rasa internally, these anubhavas are manifested externally in the body, so how can they be separate and distinct ingredients of rasa?

Gosvami: Baba, you are indeed a real pandita of nyaya-sastra. To this very day, no one has posed such subtle questions as you have. When I used to study rasa-sastra in the company of Shri Pandita Gosvami, exactly the same arguments would arise in my mind. However, my doubts were quickly dispelled by Shri Gurudeva’s mercy. The confidential significance is that in the pure consciousness (suddhasattva) of the jiva, when vibhava stimulates the function of consciousness (citta) and assists the function itself, at that time a natural wonderment (vaicittya) arises, which makes the heart blossom in various ways, and this in turn causes some outward transformations to become evident in the body. These external transformations, such as dancing, are called udbhasvara, and they are of many types. When the heart dances, the body also begins to dance, and when the heart sings, the tongue also sings. You should understand the action of other transformations in the same way.
However, the action of udbhasvara is not the original action. Rather, the anubhavas that arouse and nourish the vibhavas then spread throughout the body in the form of udbhasvara.

As soon as the sthayibhava in the heart is stimulated by the vibhava, anubhava begins its function as another action of the heart. Thus anubhava is a separate individual ingredient. When this is revealed through activities such as singing, it is called “cooling” (sita); and when it is revealed through activities such as dancing, it is called “throwing” (ksepana). There are also many other symptoms of anubhava – such as swelling of the body, oozing of blood, and separation and contraction of the bone-joints – which are very rarely seen, so I will not elaborate upon them any further. The extremely astonishing anubhavas that were seen in the body of my Pranesvara Shri Chaitanya Mahaprabhu, such as becoming like a tortoise, are not possible in sadhaka-bhaktas.