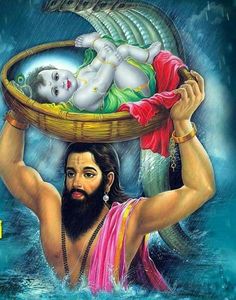 Lord Krishna appeared five thousand years ago in the Yadu kingdom of Mathura, which had been captured by the demonic Kamsa. A voice in the sky at the time of his sister’s wedding had announced that his sister’s eighth son would kill him and immediately he was ready to kill his beloved sister on her wedding day. Such is the cruel nature of demons. For their selfish interest they are ready to sacrifice any relationship.

At the time of Krishna’s appearance, Kamsa had imprisoned his own father Ugrasena, his sister Devaki and her husband Vasudeva. When Kamsa heard from Narada that demigods were taking birth in the Yadu dynasty to assist the Supreme Lord in killing him, he conquered the dynasties of Yadu, Bhoja and Andhaka and formed a coalition of like-minded demonic friends like Putana, Trnavarta, Dvivida, Bakasura, Aghasura And Jarasandha etc. who wreaked a reign of terror especially on the Yadu dynasty in which Krishna was to appear. The Yadu kings took shelter in friendly kingdoms like Pancala, Kekeya, Vidarbha, Kosala etc.

The Transcendental Birth of Lord Krishna

Krishna’s appearance happened by a transcendental process. Krishna first appeared in the mind of Vasudeva. Vasudeva felt sublime peace fill his being. He became effulgent like a thousand suns. Then Krishna transferred Himself to the mind of Devaki. Now Devaki looked exceedingly beautiful bearing the Lord in her mind. Then the Lord entered the womb of Devaki. All the demigods offered garbha stuti or prayers to Devaki’s womb where Krishna had appeared.

Then at the appointed hour when the Lord had chosen to appear, the constellations of planets and stars aligned to completely auspicious positions, the Rohini star was in ascendance, the disturbed brahmana households troubled by Kamsa’s order forbidding sacrifices became joyful, the denizens of heavenly planets of Gandharva, Kinnaras and Apsaras began to sing and dance and those of the Carana and Siddhalokas offered prayers and showered flowers. At the sea there were mild waves and thick clouds of pleasing thunder.

Krishna appeared from the womb of Devaki in the darkness of mid-night and the moon even though on the 8th day of the waning stage (krishna astami), appeared like the full moon, joyful, as the Lord had chosen to appear in the Lunar dynasty (Yadu Vamsha).

The baby was born with four hands, holding conchshell, disc, club and lotus. He was decorated with the mark of Śrīvatsa, wearing the jeweled necklace of kaustubha stone, dressed in yellow silk, appearing dazzling like a bright blackish cloud, wearing a helmet bedecked with the vaidūrya stone, valuable bracelets, earrings and similar other ornaments all over His body and an abundance of hair on His head.

Vasudeva was wonderstruck to see a newly born child so fully decorated! He felt humbled that even though he was in a pathetic situation in Kamsa’s jail, the Supreme Lord had chosen to appear as his child. Vasudeva wanted to perform a grand ceremony at Lord Krishna’s appearance, but being shackled could only offer thousands of cows to Brahmins mentally. He bowed down and offered prayers to the Lord. Devaki too bowed and offered prayers. In their prayers they extolled the transcendental nature of the Lord’s appearance. The Lord revealed that He had chosen them as His parents because they had performed severe austerities in previous births to obtain Him as their child.

The Lord ordered Vasudeva to take Him to Gokula, where Yasoda had just given birth to a girl. He told him to exchange the girl with Him. Then He turned Himself to an ordinary child and became silent.

Yogamaya, the Lord’s internal potency, then put all the residents of Kamsa’s palace, including the doorkeepers, to deep sleep and the shackled doors of the palace, opened. Vasudeva carried Krishna outside. Even though it was the dead of night, Vasudeva could see everything as clearly as in the day. There was heavy rain and thunder, but Lord Ananta sheltered Vasudeva as he carried the child. The Yamuna, roaring with foaming waves, parted way as Vasudeva approached.

At Nanda Goukula, everyone was fast asleep when Vasudeva arrived. He easily entered, exchanged the girl child just born to Yashoda with Krishna and returned to Kamsa’s prison. He put the child in Devaki’s lap and shackled his hands and feet again. When Kamsa came to know of the birth of the eighth child who was to kill him. He rushed to the prison and snatching the baby from the pitifully pleading Devaki’s hands and attempted to dash the child to the stone mercilessly. The baby slipped out of his hand and appeared in the sky in her eight-armed form as the younger sister of Vishnu. While being adored by the demigods, she declared, “You rascal, how can you kill me? The child who will kill you is already born before me somewhere within this world. Don’t be so cruel to your poor sister.”

Kamsa took pity on his sister and brother-in-law and personally released them from their chains and begged to be excused for his heinous deeds. Devaki and Vasudeva forgave him.

The following day, when Kamsa informed his demonic associates of the events of the previous night, they advised him to kill Brahmanas, cows and Vaishnavas to ward off any danger from Lord Vishnu and the demigods. In this way they brought upon themselves their own end because a civilization that does not respect true Brahmins, Vasihnavas and cows is headed for certain disaster.

At Gokula the next day Nanda Maharaja joyfully celebrated the birth of Lord Krishna.

The Lord’s birth in the material world is a wonderful event unprecedented in the history of the world. In every way His birth is above any material influence. His Supreme Will conducts His appearance, unhampered by any of the forces that compel an ordinary soul to accept a material body. The Lord’s form is completely spiritual. The fine details of His birth when faithfully studied from the Srimad – Bhagavatam under the guidance of Srila Prabhupada can allow us to enter into the realm of the Lord’s transcendental nature and pave the way for our spiritual emancipation.