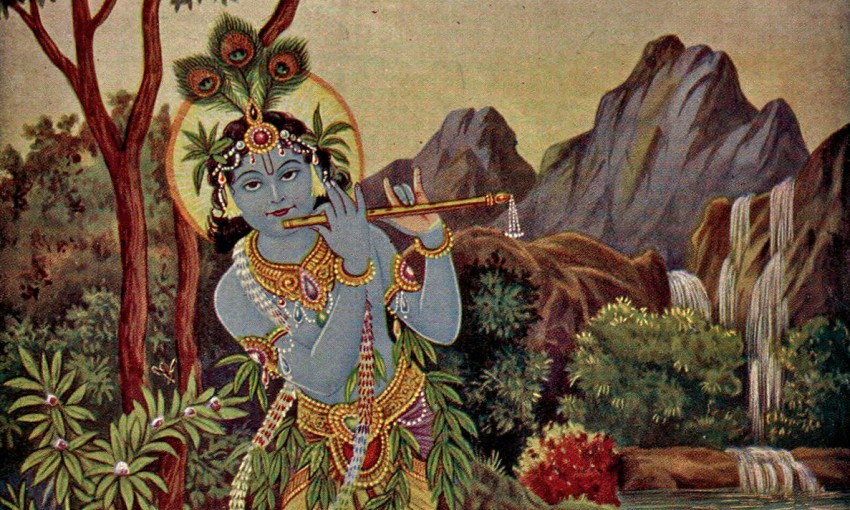 Without understanding the intricacies of Krishna, the Supreme Personality of Godhead, and without knowing His uncommon spiritual opulences, the innocent cowherd boys and men of Vrndavana began to discuss the wonderful activities of Krishna which surpass the activities of all men.

One of them said, “My dear friends, considering His wonderful activities, how is it possible that such an uncommon boy woold come and live with us in Vrndavana? It is really not possible. Just imagine! He is now only seven years old! How was it possible for Him to lift Govardhana Hill in one hand and hold it up just like the king of elephants holds a lotus flower? To lift a lotus flower is a most insignificant thing for an elephant, and similarly Krishna a lifted Govardhana Hill without exertion. When He was simply a small baby and could not even see properly, He killed a great demon, Piitana. While sucking her breast, He also sucked out her life·air. Krishna a killed the Piitana demon exactly as eternal time kills a living creature in due course. When He was only three months old, He was sleeping underneath a hand-driven cart. Being hungry for His mother’s breast, He began to cry and throw His legs upwards. And from the kicking of his small feet the cart immediately broke apart and fell to pieces. When He was only one year old, He was carried away by the Trl).avarta demon disguised as a whirlwind, and although He was taken very high in the sky, He simply hung on the neck of the demon and forced him to fall from the sky and immediately die. Once His mother, being disturbed by His stealing butter, tied Him to a wooden mortar, and the child pushed it towards a pair of trees known as _yamala arjuna and caused them to fall. Once, when He was engaged in tending the calves in the forest along with His elder brother, Balarama, a demon named Bakasura appeared, and Krishna at once bifurcated the demon’s beaks. When the demon known as Vatsasura entered among the calves tended by Krishna with a desire to kill Him, He

immediately detected the demon, killed him, and threw him into a tree. When Krishna, along with His brother, Balarama, entered the Talavana forest, the demon known as Dhenukasura, in the shape of an ass, attacked Them and was immediately killed by Balarama, who caught his hind legs and threw him in a palm tree. Although the Dhenukasura demon was assisted by his cohorts, also in the shape of asses, all were killed, and the Talavana forest was then open for the use of the animals and inhabitants of Vrndavana. When Pralambasura entered amongst His cowherd boy friends, He caused his death by Balarama. Thereafter, Krishna saved His friends and cows from the severe forest fire, and He chastised the Kaliya serpent in the lake of Yamuna and forced him to leave the vicinity of the Yamuna River ; He thereby made the water of the Yamuna poisonless.”

Another one of the friends of Nanda Maharaja said, “My dear Nanda, we do not know why we are so attracted by your son Krishna We want to forget Him, but this is impossible. Why are we so naturally affectionate toward Him? Just imagine how wonderful it is! On one hand He is only a boy of seven years old, and on the other hand there is a huge hill like Govardhana Hill, and He lifted it so easily! 0 Nanda Maharaja, we are now in great doubt-your son Krishna must be one of the demigods. He is not at all an ordinary boy. Maybe He is the Supreme Personality of Godhead.”

On hearing the praises of the cowherd men in Vrndavana, King Nanda said, “My dear friends, in reply to you I can simply present the statement of Gargamuni so that your doubts may be cleared. When he came to perform the name-giving ceremony, he said that this boy descends in different periods of time in different colors and that this time He has appeared in Vrndavana in a dark color and is known as Krwa. Previously, He has white color, then red color, then yellow color. He also said that this boy was once the son of Vasudeva, and everyone who knows of His previous birth calls Him Vasudeva. Actually he said that my son has many varieties of names, according to His different qualities and activities. Gargacarya assured me that this boy will be all-auspicious for my family and that He will be able to give transcendental blissful pleasure to all the

cowherd men and cows in Vrndavana. Even though we will be put into various kinds of difficulties, by the grace of this boy we will be very easily freed from them. He also said that formerly this boy saved the world from an unregulated condition, and He saved all honest men from the hands of the dishonest. He also said that any fortunate man who becomes at­ tached to this boy, Kn.pa, is never vanquished or defeated by his enemy. On the whole, He is exactly like Lord Vishnu, who always takes the side of the demigods, who are consequently never defeated by the demons.

Gargacarya thus concluded that my child will grow to be exactly like Vishnu in transcendental beauty, qualification, activities, influence and opulence, and so we should not be very astonished by His wonderful activities. After telling me this, Gargacarya returned home, and since then we have been continually seeing the wonderful activities of this child. According to the version of Gargacarya, I consider that He must be Narayana Himself, or maybe a plenary portion of Narayana

When all the cowherd men very attentively heard the statements of Gargacarya through Nanda Maharaja, they better appreciated the wonderful activities of Krishna and became very jubilant and satisfied. They began to praise Nanda Maharaja, because by consulting him their doubts about Krishna were cleared. They said, “Let Krishna, who is so kind, beautiful and merciful, protect us. When angry Indra sent torrents of rain, accompanied by showers of ice blocks and high wind, He immediately took compassion upon us and saved us and our families, cows and valuable possessions by picking up the Govardhana Hill, just as a child picks up a mushroom. He saved us so wonderfully. May He continue to mercifully glance over us and our cows. May we live peacefully under the protection of wonderful Krsna. “