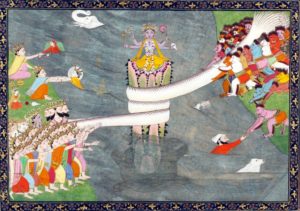 One of the famous Nagas (serpents).

The uragas and nagas (serpents) were born to Prajapati Kasyapa by his wife Kadru. #Vasuki, the eldest son of Kadru spent his childhood with his parents.

Vinata and Kadru staked on the colour of the tail of Uccaissravas (A horse obtained at the churning of the sea of Milk. To win the stake, Kadru asked her sons to hang on the tail of Uccaissravas as black hairs. But the truthful Vasuki was not prepared to do so. Kadru cursed Vasuki and the others who sided with him. From that day onwards Vasuki and those who were cursed, separated from their mother and formed into a serpent group.

3) The length of Vasuki.

The Devas and the asuras decided to get Amrta (Ambrosia-the celestial honey of immortalily) by churning the sea of milk. The Devas went to bring Mandara-mountain, to be used as the churning rod. Their attempt was futile. The asuras made a trial with the same result. The Bhutaganas (Guards) of Siva also made a vain attempt. On the instruction of Visnu, Garuda went and brought the mountain as easily as an eagie takes away a frog. Now Vasuki should be brought. The Devas and Gandharvas failed in that attempt also. Garuda who was haughty of his strength and speed, went to the city of the nagas and requested Vasuki to come to the sea of Milk. Vasuki replied that if the matter was so urgent he had no objection for being carried to that place. He took the middle part of Vasuki in his beak and flew up higher and higher and reached beyond the horizon. Still the lower half of Vasuki was lying on the ground. So he took Vasuki in his beak as folded in two. Still the result was the same. Garuda became aware of the impossibility of carrying Vasuki and returned, ashamed and disappointed. Visnu rebuked him for his arrogance. After this, Siva stretched his hand to Patala. Vasuki became a small bangle on that hand. Thus Vasuki was brought to the shore of the sea of Milk.

(i) For the safety and protection of the Nagas (serpents) Vasuki gave his sister Jaratkaru as wife to the hermit Jaratkaru. (See under Jaratkaru).

(ii) The nagas anointed Vasuki as their King.

(iii) When Vasuki saw the serpents, born of his family, falling into the sacrificial fire of Janamejaya and dying in large numbers, he sent his nephew Astika to find out a way to rescue the perishing nagas.

(v) Vasuki advised the Nagas to give the divine juice to Bhimasena, in accordance with the request of Aryaka. (See under Bhimasena).

(viii) In Tripuradahana (the burning of Tripura) Vasuki acted as the bowstring of Siva and as the axle of his chariot. (M.B. Karna Parva, Chapter 34, Stanza 22).

(xiii) When Balabhadrarama went to Patala after his death, Vasuki had gone there to receive him. (M.B. Mausala Parva, Chapter 4 Stanza 15).

(xiv) Once Vasuki and Vayu tried to find out who was the more powerful of the two, in consequence of which contest Mount Trikuta was broken from the vicinity of Mahameru and was thrown into the southern Sea. (See under Trikuta).

Arjuna sees everything in the universe; therefore he sees Brahma, who is the ﬁrst creature in the universe, and the celestial serpent upon which the Garbhodaka-sayi Visnu lies in the lower regions of the universe. This snake bed is called Vasuki. There are also other snakes known as Vasuki.