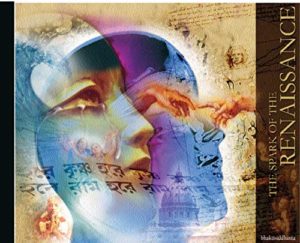 On the occasion of the Gaura Purnima Festival 2021, we announce the launch of a new book “The Spark of Renaissance”. Lord Gauranga Mahaprabhu was present in India and as a mere by- product of His presence on this planet; He sparked the energy that hit Europe and caused the Renaisssance.

Some more about the book: In preparation for the appearance festival for Lord Caitanya we offer the public to take advantage of this new book at a low intro price to help celebrate this upcoming auspicious occasion.
This book is meant for everyone since few know God personally descended to stop the evils present during this period of the Renaissance.
This may sound revolutionary that God was present in India and as a mere by-product of His presence on this planet; He sparked the energy that hit Europe and caused the Renaisssance.
Lord Caitanya’s (God) central purpose was to initiate the chanting of His holy names in every town and village, which is still going on today with the Hare Krsna movement.

The story is told here of what happened in Europe year by year during the 48 years of God’s presence on this planet- 1486 till 1534.

BOOK SUMMARY
The Spark of the Renaissance will establish that one personality, Lord Sri Caitanya Mahaprabhu (God Himself, was present on Earth from 1486 through 1534), was the direct cause of the Renaissance. His immediate influence expanded more than 50 years before and after His birth with the advent of His direct expansions and disciples that carried on His eternal message. This time of the Renaissance- 1450 to 1550 is widely accepted as the dynamic, enlightened precursor to our modern world.