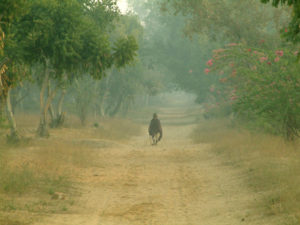 The Lifting of Govardhana Hill

Govardhana Hill is the sacred mountain that was lifted by Krishna in order to save the Vrajavasis from the torrential rains sent by Lord Indra, the king of heaven, who wanted to punish the Vrajavasis for stopping his worship.

Once, Krishna’s father Nanda Maharaja was about to perform the annual sacrifice called Indra-yajna, by making various offerings to the demigod Indra.

However, Krishna strongly objected and suggested that Nanda Maharaja should instead worship Govardhana Hill.

Krishna reasoned that it was Govardhana Hill and not Indra, who provided the Vrajavasis with all the necessities of life.

This includes pasturing grounds and fresh grass for the cows, crystal clear water from the mountain streams for drinking, and wild vegetables and roots for eating.

The munificent Govardhana Hill also provided various pigments, minerals, and precious stones, besides a variety of medicinal herbs and the most luxuriant trees that not only provide soothing shade, but also delicious fruits and beautiful sweet smelling flowers.

Realizing that his sacrifice had been stopped by Nanda Maharaja simply on the advice of his talkative little child, Lord Indra became furious with the Vrajavasis and decided to punish them by calling for the fearful samvartaka rain-clouds of devastation, which appear at the time of the universal dissolution.

Suddenly the skies over Vrindavana became darkened by blackish colored clouds and strong winds began to blow, throwing dust and debris into the air.

This was followed by loud claps of thunder and deadly streaks of lightening.

Then the rain suddenly came down in great torrents almost as thick as pillars, completely inundating the whole area and causing the lakes and rivers to overflow their banks.

It appeared that the entire land of Vrindavana, along with all its inhabitants, would be drowned in a great deluge of water.

Krishna understood that the devastating rainfall was caused by Indra, who was attempting to punish the Vrajavasis with an exhibition of his so-called mystic powers.

At that moment, Krishna decided to teach Indra a lesson and at the same time save the Vrajavasis from the danger that was now befalling them.

Krishna then immediately lifted Govardhana Hill with His left hand and held it aloft just like an umbrella.

The Vrajavasis along with their families, livestock, and all their household possessions packed in bullock carts, immediately took shelter from the heavy rainfall under Govardhana Hill.

Seeing such an amazing display of power by Krishna, who held the great mountain aloft for seven continuous days without a break, Indra became completely baffled and hopelessly frustrated in his attempt to punish the Vrajavasis.

In a downcast and despondent mood, having been thoroughly defeated and humiliated by a mere cowherd boy, Indra recalled the samvartaka rain-clouds and immediately left for his own abode in the heavenly planets.

After the rain subsided, Krishna replaced Govardhana Hill and all the Vrajavasis happily returned to their respective homes, while glorifying Krishna for His heroic deeds in having saved them from the devastating rains.

The benefit gained from circumambulating Govardhana Hill is beyond calculation.

“To the west of Mathura at a distance of two yojanas (16 miles) is Govardhana, the topmost holy place. Anyone who performs its parikrama will never have to take birth in this world. This I promise. “
(Varaha Purana)

Actually the real benefit of coming to Govardhana and performing his parikrama is to be able to engage in Sri Sri Radha Krsna’s divine service directly.
Radha-Krsna are still visible to everyone on the form of Govardhana Hill.
And anyone who has Govardhana vision even for a moment will develop a loving mood in the footsteps of the Vraja gopis.

By the divine will of Lord Krsna, the whole of Vraja Dhama is slowly becoming unmanifest, but Sri Yamuna (river) is steel visible and eternally singing the glories of Radha-Krsna and anyone who bathes in her transcendental waters will become purified of all sinful activities and the desire to perform loving service to Radha-Krsna will sprout in the heart.

The dust of Vraja is available for everyone to roll in and thus get the divine mercy of Lord Balarama (Who has manifested as the abode of Lord) who is the original spiritual master and is ever willing to engaged us in the loving service of Radha-Krsna and Sri Sri Radha-Krsna are manifest as Govardhana Hill to accept our attempts to serve Them.

So, following in the footstep of Chaitanya Mahaprabhu, Nityananda Mahaprabhu the six Goswamis–Sri Rupa, Sanatana, Bhatta Raghunath, Sri Jiva, Gopal Bhatta, and Raghunath Das and all of the great vaisnava acaryas, we will perform the parikrama of Govardhana Hill.

Next we will pray to Hanuman who protects the devotee from offenses while performing Govardhana parikrama (which is non different to worshiping the lotus feet of Radha-Krsna (pada-sevana) with this Mantra;
“Yatha ramasya yatrayam
siddhis tvam me pratisthitah
tatha paribhrame me dya
bhavan siddhiprado bhava”
Now we will chant the Govardhana parikrama mantra and start our parikrama.
“namo vrindavanam kaya
tubhyam goloka mauline
purna-brahma tapa-traya
namo govardhanaya ca”
“After seeing the Deity of Harideva and circumambulating Govardhana Hill, one attains the result of having performed a Rajasuya yajna and an Asvamedha yajna of this there is no doubt.” Adi-Varaha purana.