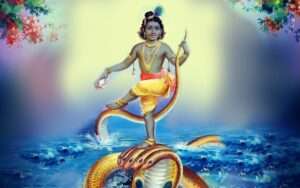 Chapter 17: The History of Kâliya and Krishna Swallows a Forest Fire

(1) The king said: ‘Why did Kâliya give up Ramanaka, the abode of the serpents, and what caused the enmity of Garuda especially towards him?’

(2-3) S‘rî S’uka said: ‘The snake people of sacrifice here [in Nâgâlaya] were in the past urged to pay tribute to the serpents every month at the base of a tree, oh mighty-armed one. In order to secure their protection the serpents every new moon each presented their portion to Garuda, the great power over them. (4) Kâliya, the son of Kadru conceited under the influence of his venom and strength, in defiance of Garuda ate those offerings himself. (5) Hearing about it oh King, that mighty and beloved devotee of the Supreme Lord with great speed rushed forward to kill Kâliya. (6) Garuda swiftly attacking fell upon him who, armed with poison and full size raised with his many hoods, looked most fearsome with his tongues and terrible eyes. The snake then bit him with the help of his weapons, the fangs. (7) The carrier of Madhusûdana, the son of Târkshya [see 6.6: 21-22] with his formidable prowess full of anger swiftly moving warded off Kâliya, the son of Kadru and struck him with his left wing that glowed like gold. (8) Beaten by Garuda’s wing Kâliya utterly distraught entered a lake of the Kâlindi where it was difficult for Garuda to go.

(9) Saubhari Muni [mediating under water] once had denied Garuda the right to desire any of its water creatures, his normal sustenance [see 9.6], but because he was hungry he resisted him and took one. (10) Seeing the fish who lived there in a state of misery, most unhappy because the king of the fish had been killed [by Garuda], Saubhari, in order to set things right, out of compassion for the sake of their welfare said: (11) ‘I swear, if Garuda enters this lake to eat the fish, he will immediately lose his life!’ (12) Kâliya was the only one who knew this, no other serpent, and therefore hiding in fear of Garuda he dwelled there, the very place from where he was expelled by Krishna.

(13-14) The moment the cowherds saw Lord Krishna rising up from the lake, divinely clad, with a garland and scented, covered by many fine jewels and decorated with gold, all their senses sprung back to life. Filled with joy they embraced Him affectionately. (15) When Yas’odâ, Rohinî and Nanda, the gopîs and the gopas oh son of Kuru, rejoined with Krishna they regained all their functions and that even happened with the dried up trees. (16) Râma and Acyuta, the Infallible One, embraced each other laughing, well aware of Their potency. Out of love Balarâma raised Him on His lap and admired Him from all sides. Thus They together with the cows, the bulls and she-calves experienced the highest pleasure. (17) The learned and respectable personalities along with their wives all came to Nanda and said: ‘Your son having been seized by Kâliya has now by divine ordinance been freed. (18) For the sake of Krishna’s safety please make donations to the brahmins’, and Nanda, happy minded oh King, gave them cows and gold. (19) The chaste Yas’odâ who had lost and retrieved her son, the One of Great Fortune, raised Him on her lap, hugged Him and allowed her tears to flow freely.

(20) That night oh best of the kings, the cows and the people of Vraja, weakened as they were because of thirst, hunger and fatigue, remained there at the shore of the Kâlindi. (21)Then, because of the summer heat, in the middle of the night from all sides a forest fire arose that closed in the sleeping Vrajasis and began to scorch them. (22) The people of Vraja thereupon woke up. In distress because they would burn they turned to Krishna for shelter, He the Master, who by the power of His spiritual potency had appeared like a human being [compare 10.8: 16]. (23) ‘Krishna, Krishna, oh Greatest of Fortune! Oh Râma of Unlimited Power, this most terrible fire is about to devour us who belong to You! (24) Please protect us, Your people, Your friends, against this insurmountable [deadly] fire of Time . Oh Master, we at Your benevolent, blessed feet that drive away all fear, are incapable [to escape from here]!’ (25) The Lord of the Universe, the Unlimited One who possesses endless potencies, this way seeing the desperation of His people, thereupon swallowed that terrible fire.’