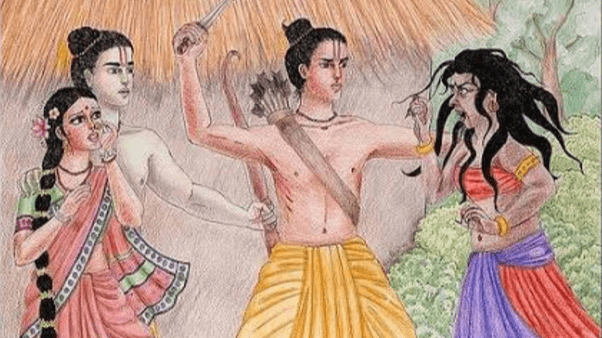 One day, along the path that skirted Rama’s hut, Surpanakha, Ravana’s sister, the king of the Raksasas, happened to pass by chance. Surpanakha was a monstrous and evil being, a worthy sister of Ravana. Her features were hideous and she was physically gigantic. She happened to see Rama sitting in meditation. More beautiful than a Deva, his body radiated light like a second sun. The Rakshasi stopped to look at him, enraptured, almost amazed that such a handsome man could exist, and felt a strong attraction for him. Her heart filled with lust. Thinking that she could have him as a husband, she presented herself in front of Rama and spoke to him.

“Wonderful young man, I am Surpanakha, the sister of the powerful Raksasas Ravana and Kumbhakarna. Khara and Dussana, famous all over the world, are also my brothers. Who are you? What’s your name? And, where are you from? You are the most attractive man I have ever met, and I am curious to know your name and where you come from.”

Rama looked at the monstrous woman and immediately sensed her intentions. In a way, he was quite amused by the situation.

“My name is Rama,” he replied jokingly, “and this young man is my brother Laksmana. This woman is my wife Sita. We are outside our kingdom because we have been exiled due to a conspiracy. Our kingdom is Koshala, which was once protected by the famous King Dasaratha, our father. But tell me, what can I help you with?”

The gigantic Surpanakha had a hideously deformed body, but she was so struck by Rama’s beauty that she did not even think about it.

“I just want to have you as a husband,” she answered. “Since I saw you, I immediately felt a strong attraction for you. Please don’t refuse me, accept my proposal.”

The situation was somewhat funny and embarrassing. Rama took the joke.

“Your beauty is such that I find it hard to refuse you,” he replied. “But I am already married and have vowed to have only one woman in my entire life. But here is my brother Laksmana, who is as handsome as I am, equally brave and wise. He hasn’t made a vow of chastity like me. Contact him, and you will see that he will accept you for sure.”

Surpanakha took those words seriously and did not notice that Rama was making fun of her. So, she turned to Laksmana, looking at him with tenderness and desire.

“Laksmana, my beautiful hero. Rama cannot marry me because of a vow made to his wife, but you have not made any vows and you are free to marry me and enjoy life with me.”

Laksmana continued the joke started by his brother.

“It is true that you are such a beautiful girl that it is difficult to resist,” he retorted, “and I would like to accept you as a wife, but know that I am only Rama’s slave. You won’t want to get involved with a slave! Insist on him and you will see that he will abandon his ugly wife to run away with you.”

But the game had gone too far. The hot-tempered and aggressive nature of the Rakshasi suddenly flared up, violent, uncontrollable. Thinking that Sita was really the obstacle that stood between her and the satisfaction of her desires, she decided to kill and devour her. With a frightening cry, Surpanakha threw herself at Sita, who screamed in terror. Laksmana, very quickly, immediately realized the grave danger and barely had time to draw his sword and stand between the monster and Sita. With three precise sword blows he cut off her nose and ears. Badly wounded, Surpanakha ran away, screaming in pain and and anger.