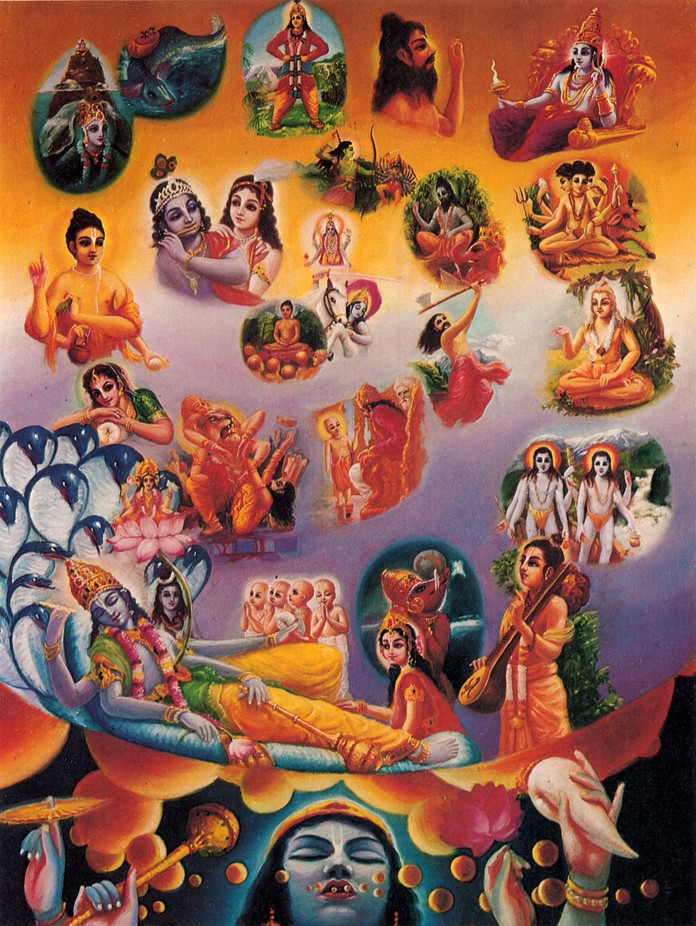 Summary of Srimad-Bhagavatam from the Narada Purana

Brahma said: Listen, O Marichi [a son of Brahma]. I will tell you about the Purana named Srimad-Bhagavatam, devoted to the subject of Brahman [with focus on Sri Krishna] and rendered by Vedavyasa.

Its eighteen thousand glorious verses in twelve cantos have the form of a wish-fulfilling tree and destroy sins.

O best of brahmanas, in the First Canto, in the meeting of Suta with the sages, the universal form of Bhagavan is described.

The virtuous [i.e., bestowing punya, or pious merit] stories of Vyasa, the Pandavas, and Parikshit are narrated there [in the meeting] in detail.

The Second Canto of very intelligent Vyasa also describes the characteristics of the Puranas and the process of creation.

[The Third Canto tells of] the meeting between Vidura and Maitreya. It has a section on creation and ends with descriptions of Brahman and Paramatma.

The Third Canto also describes the [original] Sankhya of Kapila. Beginning with the story of Sati and the virtuous story of Dhruva, the supreme Fourth Canto narrates the virtuous stories of Prithu and Pracinabarhishat, and of the visarga [the secondary creation, by Brahma and others].

[The Fifth Canto narrates] the virtuous story of Priyavrata and his dynasty, as well as the description of the universe with its lokas [worlds].

The Fifth Canto also describes the stay in hell. The story of Ajamila, the progeny of Daksha, the story of Vritra, and, at its end, the virtuous birth of the Maruts are spoken about by Vyasa in the Sixth Canto, which concerns the Lord’s comprehensive mercy.

The virtuous story of Prahlada and a description of varnashrama based on material desires are narrated in the Seventh Canto, O dear child, which concerns the description of materially motivated activities.

[The Eighth Canto] describes Gajendra’s liberation, the manvantaras [periods ruled by the Manus], the churning of the ocean, and the bondage of the opulent Bali.

The Ninth Canto, concerning a description of dynasties, speaks of various vamshas and their characteristics, O great sage. The story of Krishna’s childhood, His life in Vraja as a young boy, His life in Mathura as an older boy, His life in Dvaraka in His youth, and His removal of the earth’s burden are remembered in the Tenth Canto in regard to the topic of annihilation.

The talks between Narada and Vasudeva, between Yadu and Dattatreya [as an avadhuta brahmana], and between Sri Krishna and Uddhava, as well as the mutual end and liberation of the Yadus, are remembered in the Eleventh Canto. The future of Kali-yuga, the liberation of King Parikshit, the expansion of Vedic branches, the austerities of Markandeya, and the transcendent supreme glory of Lord Krishna are described along with the enumeration of the Puranas in the Twelfth Canto. Thus I have narrated to you, O dear child, the Srimad-Bhagavatam, which concerns the ultimate shelter.

One who speaks, hears, teaches, appreciates, and follows this summary narration will get devotion to the Lord, enjoyment in this world, and liberation.

If on the full-moon day of the month of Bhadra one places Srimad-Bhagavatam on a golden throne, gives it as a gift to a brahmana with loving affection, worships him, and offers him clothes, gold, and other gifts, one will get the desired devotion to the Lord. Even by reciting or listening to this enumeration, one will achieve the supreme fruit of listening to that Purana.