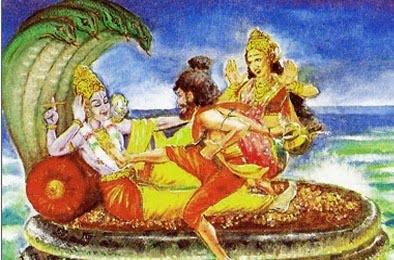 Srivatsa means “beloved of Sri”, the goddess Lakshmi. It is a mark on the chest of Vishnu where his consort Lakshmi resides. It is said that the tenth avatar of Vishnu, Kalki, will bear the Shrivatsa mark on his chest. It is one of the names of Vishnu in the Vishnu Sahasranamam. Srivatsa is a popular name in Andhra Pradesh, Telangana, Tamil Nadu and Karnataka.
In South India, the bronzes made after circa 10th century, the #Shrivatsa symbol is shown as an inverted triangle on the right chest of Vishnu and his various incarnations.

Śrīvatsa is a curl of white hair on the chest of the Lord which is a special sign of His being the Supreme Personality of Godhead. In Vaikuṇṭhaloka or in Goloka Vṛndāvana, the inhabitants are exactly of the same form as the Personality of Godhead, but by this Śrīvatsa mark on the chest of the Lord He is distinguished from all others.
(Srimad Bhagavatam—-3:19:15—-purport).

O Lord, You are exceedingly attached to the activities of Your pure devotees, yet You are never attached to the goddesses of fortune who constantly engage in Your transcendental loving service. How can You be purified, therefore, by the dust of the path traversed by the brāhmaṇas, and how can You be glorified or made fortunate by the marks of Śrīvatsa on Your chest?
(Srimad Bhagavatam—-3:16:21—-translation).

The Lord has shoulders just like a lion’s. Upon these shoulders are garlands, necklaces and epaulets, and all of these are always glittering. Besides these, there is the beauty of the Kaustubha-maṇi pearl, and on the dark chest of the Lord there are streaks named Śrīvatsa, which are signs of the goddess of fortune. The glittering of these streaks excels the beauty of the golden streaks on a gold-testing stone. Indeed, such beauty defeats a gold-testing stone.
(Srimad Bhagavatam—-4:24:49—-translation).

The curling hair on the shoulders of a lion always appears very, very beautiful. Similarly, the shoulders of the Lord were just like a lion’s, and the necklace and garlands, along with the Kaustubha pearl necklace, combined to excel the beauty of a lion. The chest of the Lord is streaked with Śrīvatsa lines, the sign of the goddess of fortune. Consequently the Lord’s chest excels the beauty of a testing stone for gold. The black siliceous stone on which gold is rubbed to test its value always looks very beautiful, being streaked with gold lines. Yet the chest of the Lord excels even such a stone in its beauty.
(Srimad Bhagavatam—-4:24:49—-purport).

In Vaikuṇṭhaloka the Supreme Personality of Godhead has four hands and decorations like the Śrīvatsa mark on His chest and the gem known as Kaustubha. These are special indications of the Supreme Personality of Godhead. The Lord’s personal attendants and other devotees in Vaikuṇṭha have the same features, except for the Śrīvatsa mark and the Kaustubha gem.
(Srimad Bhagavatam—-6:9:29-30—-purport).

One devotee praised the bodily features of Kṛṣṇa when he saw the Lord in His manifested personal feature. He exclaimed, “How wonderful is the personal feature of Lord Kṛṣṇa! How His neck is just like a conchshell! His eyes are so beautiful, as though they themselves were encountering the beauty of a lotus flower. His body is just like the tamāla tree, very blackish. His head is protected with a canopy of hair. There are the marks of Śrīvatsa on His chest, and He is holding His conchshell. By such beautiful bodily features, the enemy of the demon Madhu has appeared so pleasing that He can bestow upon me transcendental bliss simply by my seeing His transcendental qualities.”
(Nectar of Devotion).

Vasudeva saw that wonderful child born as a baby with four hands, holding conchshell, club, disc and lotus flower, decorated with the mark of Śrīvatsa, wearing the jeweled necklace of kaustubha stone, dressed in yellow silk, appearing dazzling like a bright blackish cloud, wearing a helmet bedecked with the vaidūrya stone, valuable bracelets, earrings and similar other ornaments all over His body, and beautified by an abundance of hair on His head. Due to the extraordinary features of the child, Vasudeva was struck with wonder.
(Krsna Book).

Arjuna then saw the omnipresent and omnipotent Supreme Personality of Godhead, Mahā-Viṣṇu, sitting at ease on the serpent bed. His bluish complexion was the color of a dense raincloud, He wore a beautiful yellow garment, His face looked charming, His broad eyes were most attractive, and He had eight long, handsome arms. His profuse locks of hair were bathed on all sides in the brilliance reflected from the clusters of precious jewels decorating His crown and earrings. He wore the Kaustubha gem, the mark of Śrīvatsa and a garland of forest flowers. Serving that topmost of all Lords were His personal attendants, headed by Sunanda and Nanda; His cakra and other weapons in their personified forms; His consort potencies Puṣṭi, Śrī, Kīrti and Ajā; and all His various mystic powers.
(Srimad Bhagavatam—-10:89:54-56—-translation).

Bhrigu kicked Visnu.
Long ago all the Maharsis joined together to perform a yaga on the bank of the river Sarasvati. A dispute arose among them as to who was the most mighty among the Trimurtis. Some of them voted for Brahma, others declared that Visnu was more mighty than the other two, while a third group stood for diva’s superiority. They unanimously elected Bhrgu to ascertain and find out the truth of kite matter.

Bhrgu set out to Devaloka. First he went to Brahma’s assembly. There, in the presence of Brahma who was seated, in the midst of many Munis, Bhrgu took his seat on a stool. Brahma was provoked by thus act of disrespect. Bhrgu left the place without a word and went to Siva’s place. Siva rose from his seat and approached him to embrace and welcome him. Bhrgu shrank back saying, “Do not touch me ?” Siva became angry and was about to hit him with his trident when Parvati stopped him.

There he saw Mahavisnu in a deep slumber. Seeing Mahavisnu whose task is the preservation of the world, sleeping like an irresponsible person, Bhrgu gave him a kick on his breast. Visnu who sprang up suddenly, saw Bhrgu standing before him. He begged pardon of the sage. He declared that he would carry Bhrgu’s footprint permanently on his chest as a sign of his repentance for having shown disrespect to the Maharsi. This foot-print still remains on Visnu’s chest and is known by the name #Srivatsa. In this way, the Munis came to the conclusion that Mahavisnu is the noblest of the Trimurtis.
(Bhagavata, Dasama Skandha).